We had an exciting evening last week. Sweety was having his monthly movie night with his friends. They were watching Lord of the Rings on our big television in our family room which is upstairs in our house. I was babysitting grandson #2, Samuel. 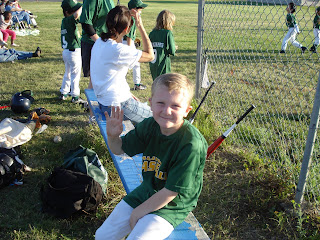 Isn't he the cutest thing? 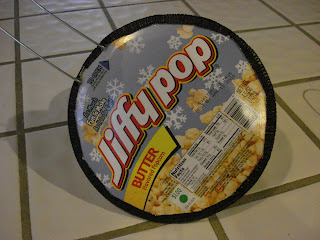 I got out the Jiffy Pop for Samuel and I to snack on while we watched a movie downstairs. Now I have grown up on Jiffy Pop and I in no way hold them responsible for what happened. I don't want any of you writing them letters, the following was totally my fault. 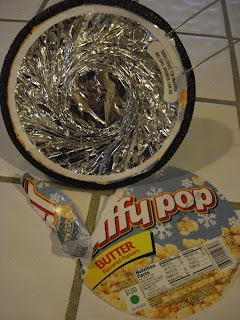 Do you see the paper ring around the foil? It's there for a purpose people. It holds things in place. I tore ours off as the entire lid wasn't coming off like it should.

As the it started to pop the popcorn started coming out around the edges and falling on the stove.

Did you know that popcorn can catch fire rather QUICKLY! So what do I do? Blow on the flames. Duh! Stupid me! Yes, I have a box of baking soda right by the stove. Did I pour it on the fire? No.

I yell for Sweety and then I yell for Barry but I don't think they could hear me. All the time forgetting about Samuel and the dog and most everything except the fire. I was panicking as by then the flames were about 18" high. Then suddenly I had five guys in the kitchen and with their help the fire was put out by smothering it with pan lids. How did they know to rush down to my rescue? Samuel (refer to cute little fella above) on his own rushed upstairs, "Guys, there's a fire in Grandma's kitchen!" Samuel gets an A+ in fire safety while Grandma Jean gets an F-.

Needless to say, the next morning I went down and bought a fire extinguisher for the kitchen. 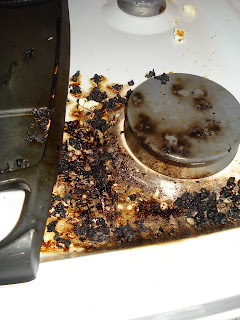 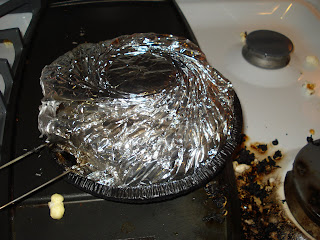 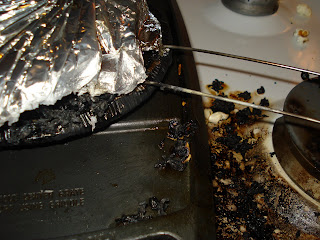 Everything cleaned up just fine and the smoke smell was gone the next day. I took the pictures mainly for the insurance company in case the stove was damaged. And no, I didn't take any pictures of the flames! I may be dumb, but I'm not stupid! Te He!!
Next time I'm making microwave popcorn.
Posted by Miss Jean at 7:04 PM

Amongst The Oaks said...

Hi Miss Jean,
Thank GOODNESS you are all ok. And thanks for the lesson on Jiffy Pop. It looks like your countertop is ruined too. I hope you can get it replaced easily.
Thanks for the visiting my blog.
Have a wonderful Mother's Day.
Laura

I didn't know they still made jiffy pop! Maybe there's a reason :) sorry for your big mess. . . Hope Mother's Day is good to you. Pam in Chico

Oh.My.Word! How scary! I do love popcorn. I use the microwave kind name, but I remember using JIffy Pop years ago. There's nothing like the smell of popcorn, but burned popcorn is another thing.
I hope it didn't damaged your stove.

Miss Jean! Oh My Gosh! I'm glad nothing was damaged and no one got hurt. I didn't know this could happen with Jeffy Pop. I haven't used Jeffy Pop since camping, but thanks for the heads up. Mumzie

Oh my gosh Miss Jean! I'm so glad it all turned out ok. I love how you gave yourself and Samuel grades for fire safety -- too cute!