What a Beautiful Day!

We had such a beautiful day today!  The first thing I did, as with most Wednesdays, was to go to my weekly Sew and Tell meeting at Above and Beyond Sewing and Vacuum. We always have so much fun.  If for some reason I have to miss a meeting I feel like I should bring an excuse note from home.

After the meeting I was going to run down to a local kitchenware shop to pick up something for my daughter, but thought I'd run back home first and pick up the hubs.  It was such a beautiful day out.  In the 50's with blue sky and it made me feel guilty to leave him home on such a nice day.

After we stopped at the shop, we were trying to think of somewhere to go eat lunch.  After driving a bit I remembered someone at a quilt class mentioned a good restaurant in Castle Rock which is not far from where we were.  I thought, wrongly, that Castle Rock was just a new area of businesses between Denver and Colorado Springs.  Turns out there is quite the historical downtown area.  We ate lunch at The Castle Cafe which is located in a historical building downtown.  We had a great lunch and then I discovered a couple antique stores.  Yipee! 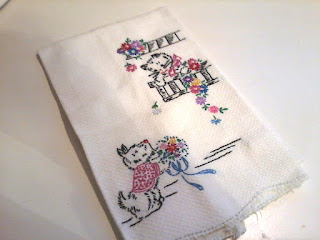 This is all I bought.  Isn't it cute!?!  I have it hanging in my laundry room with my other Scottie linens.

We did some more exploring east of Castle Rock but finally turned around as the sun was going down and I didn't want to end up in Kansas.

Our son is coming home to visit the end of the month!  That's a big YAY! As you know, he's in the Navy and we don't see him often.  While he's home I'm going to have him hook up our wifi so I can use my laptop and not my husbands Mac and then I'll be able to load pictures that I've take on my camera so I'll be able to post more of them on my blog.....whew!

Aaron sent me a note telling me when he was going to be coming home and asked me to de-feminize the guest room.  HAHAHAH!  My husband gets Sports Illustrated magazine so I'm putting the swimsuit edition on the bed and calling it good!

Enjoy the rest of your week!
Posted by Miss Jean at 7:09 PM

You're TOOO funny Miss Jean! I'm thinking the swimsuit edition will be the perfect Man Cave accessory. And your little towel is adorable -- it sounds like you had a perfect day!

That towel is A-D-O-R-A-B-L-E!!! That's funny about your Son and the guest room too... can totally see him saying that. ha ha