The Good and the Bad

The Good: Since my blog is "In The Garden With Miss Jean", I thought I should show you something that is blooming in my yard today. This is a beautiful miniature camellia that I have on the patio in a container. I bought it without knowing what it would look like. But being it was pink and a miniature, how could I go wrong. The name of it is Pink Wings and I found it at my favorite nursery in Turlock, California called The Greenery. It's presently no more than 24 inches tall and I hope it stays that small. It's just covered in buds so will make quite a spectacular site from inside the house looking out. Camellias are one of my favorite plants and I have lots of them around the front and back of the house. I just wished they bloomed in the summer. 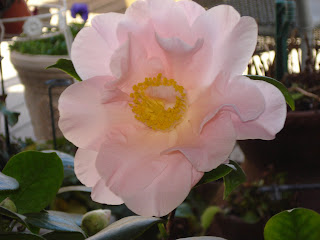 The Bad: We had quite an event in our neighborhood the other night. Some kids (I don't know the ages yet) were out drinking and doing drugs and ended up in a police pursuit. Ours is just a little town of only about 7,000 people and we are surrounded by farms and orchards. Nothing ever happens here! While being chased, the driver turned off the main road onto the street that runs by the side of our tract. I don't know how or why he lost control of his vehicle but he ended up in our neighbors house. This house is four doors down from mine and is the corner house onto the street. No one was injured but there is extensive damage to the home. They demolished the living room and thankfully no one was in there at the time. Had it been the model home like I have it would have gone into a bedroom. So like most things, it could have been worse. 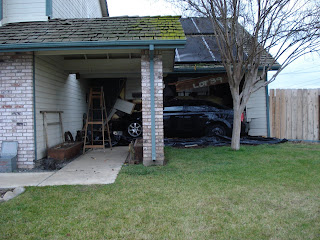 There are tire marks just to the right of the tree so it looks like the car headed straight at the house and then somehow slid sideways. The car hasn't been moved yet. They have to get a structural engineer in first to make sure nothing collapses when they move it. All utilities to the house had to be shut off.

Wow! Someone's in BIG trouble!!! I can't believe you have blooming flowers -- we have 4 inches of snow -- does that count???

Good grief is right~my town is smaller than yours by a thousand, and it's amazing the crazy things that can occur...thankfully, once in a blue moon!
Have always loved camelias.
You are obviously NOT where this snowy winter is!

I love the camelia. The Greenery was one of my favorite nurseries back in the 1970's when I lived in Turlock. Yes, I'm a Turlock girl. Anyway, I love the pink! Wow! Those country kids sure made a mess of your neighbor's house. I image it will be front page news on Wednesday.
Mumzie

Oh my Goodness!! The last thing you'd expect is to have a car come crashing through your house...it IS a good thing nobody was in that room...Holy Cow!

Love your Camellia...we are having snow right now...no blooms in sight!
Hugs,
Robin

Good grief is right! What a story.

Hi Miss Jean, my name is Jeanne and I read your comment on Penny's blog so I decided to drop in. Your comment about hot milk on toast hit home and I had almost forgotten about it. My mom also made the same thing when we didn't feel well. We didn't use sugar, just butter on the toast. It is a taste that always makes me feel better when nothing else sounds good. I also love hot tea and my electric blanket. LOL.
I too love camellias. I think they are almost wax looking.

Your bad news is shocking. What to do with kids like that. It is a real concern all over the world. Your poor neighbors. Lucky it wasn't you.

Your camelia is gorgeous! Don't come over here and look at my pathetic yard!!

That miniature Camellia was worth the chance you took buying her. It is pink.. and so pretty... her just seemed right. What a delicate beauty that. You must love living in California among orchards and lavender fields, and in such wonderful weather. Where is the color button for comments so I can make this one green... you know like green with envy?

How awful about that house. How great it was not yours and that no one was hurt or worse. Wow! what an upsetting event, especially for a sleepy and peaceful little town.

Can you imagine Maggie's response if someone came barreling into your home? :-/

My goodness! You're right...they are so lucky is wasn't much worse.

I wanted to let you know that I am in the Spring 2009 issue of Artful Blogging and that they used your Maggie and Marjorie painting in the article. :)

WOW! Talk about excitement! Goodness! I jsut came across your blog and LOVE all the pics of your Maggie! I have a scottie named Ally and just can't imagine a better friend!
Smiles,
Beth