I had a busy, busy weekend folks. How about you? Mine started on Friday with a class in the bay area. I turned out to be such a dunce and my apologies to the teacher. Sometimes when I take a class that is outside of my comfort/skill area I turn into a real mess. Let's just say I hope she lets me take classes from her in the future.

Saturday Sweety and I drove down to the Fresno area. He has his favorite winery and I have my favorite quilt shops. There was also a quilt show going on in Clovis that I attended. There is a really eclectic neighborhood in Fresno called the Tower District. I had seen this little restaurant for years but never went there. It's called Gradmarie's Restaurant but really everyone calls in The Chicken Pot Pie Restaurant. Sweety and I had lunch there and it didn't disappoint. Homemade Chicken Pot Pies and cole slaw. Wonderful!!! We were even able to bring some pies home which we ate for dinner Sunday.

The quilt show was small, but great had quilts and better than average lighting. That is always a big plus. I visited two quilt shops which were really busy as there was a shop hop going on. I was able to pick up the fabric I was looking for. It's for a secret project I'm working on. Nope, can't get that information out of me. I won't tell. Can't bribe me!

The quilt show in Manteca was nice, also. There was something there for everyone. 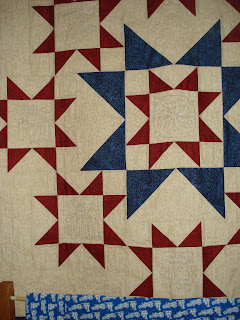 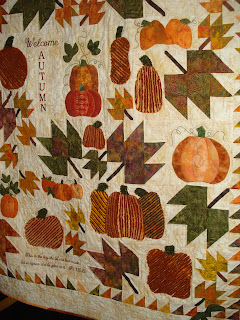 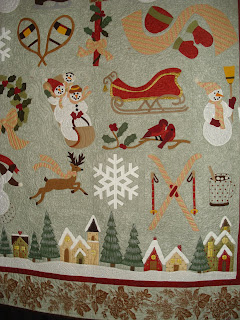 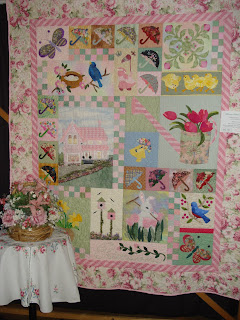 And something for Spring 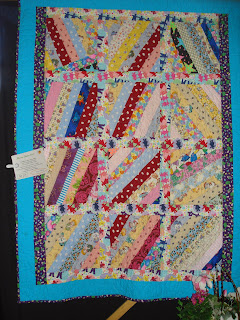 There was also something to tug at your heart strings. The above quilt was made by my BFF's granddaughter who is 8 years old. It is a present for her Daddy and she calls it Strippy Scraps for Dad. She picked out the fabrics from her large stash of fat quarters, cut them out and sewed it together on Grand Ma Ma's Featherweight sewing machine all by herself. Grandma helped her with the quilting on a long arm but basically she made this quilt by herself! Way to go little one!!! I'm sure Daddy, and Mommy, are very proud of you!!!!!

My weekend ended with the above mentioned Chicken Pot Pies and watching the Academy Awards. Go Sandra!!!

I hope you all had a wonderful weekend, also.

That first quilt is just my style.

Oh, that sounds like fun. Especially the restaurant. You have to share the address with me. I love chicken pot pie and coleslaw..... yes, yes, Oh yes, soooo good.

Sounds like you had a perfect weekend Miss Jean! And how could it not be, with chocolate covered strawberries??? ;-)

MMMM...chicken pot pie....my tummers is growling. Makes my bowl of shredded wheat pale in comparison. Fiona is waiting to lick the bowl....

LOVE the quilt that Nikki's grandaughter made! WOW and double WOW!!!!! She is going to take after her grammy and auntie!