I've often read about lucky quilters that get to "stunt sew" for designers. They make the pattern that the designer has made, often using their fabric as well. You have to figure that designers don't necessarily have the time to make all of their samples themselves so they enlist the help of experienced and extra talented quilters. 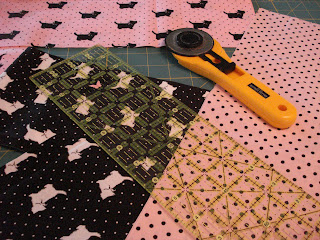 Well, howdy doody, Miss Jean is doing some Secret Squirrel sewing. I'm doing some sewing for someone using some fabric that I already had on hand. Not that I'm that experienced and extra talented, but it's a friend so she asked me to help. That's all the information you are going to get out of me until the big reveal. I should have had the project finished by now, but it's been a rough week for me. Just look at the blue star banner on the side of my blog and you can guess why my mind has been elsewhere. Hopefully, I can get the project done asap and my Rock Star designer will be happy. 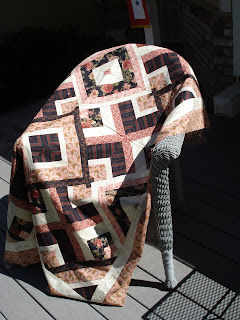 On another note, here is a quilt top that I have had tucked away for a long time. My friends and I went on a quilt retreat a number of years back and the project was a mystery quilt. The mystery ended up why in the world did we even go on the retreat. Lesson learned, all quilt retreats are not created equal.

Anyway, it's a complicated pattern and I knew I had twisted a couple of the blocks up but couldn't figure out what was wrong. I got it out the other day and decided to finish it. I like it now more than I did before. 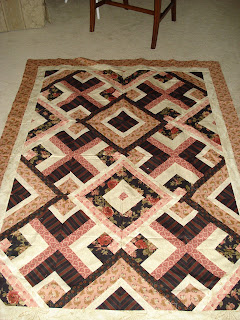 I have finally figured out what the problem is. It is four blocks wide by six blocks long. The eight blocks of the top right quarter of the quilt are totally twisted. How did I figure it out? I printed out the above picture and cut out the twisted blocks and played with them until it was right. Sort of like a quilt puzzle. I didn't want to take it all out until I knew what to do. I suppose I could leave it but it would drive me crazy. Because there is a lot of bias going on I'm going to have to be careful picking it out so I don't stretch it. Then I'll put them back the way they should be and reattach the borders.

My question to you is this. Would you do it? For you experienced quilters, enlarge the picture and I think you'll see what I mean. As random as it looks at first glance, there is a definite pattern. Would you risk stretching it out? What to do, what to do!
Posted by Miss Jean at 9:05 PM

Jean, I enlarged it and could see what you are talking about, but the quilt top is so nice and flat now, I think I would leave well enough alone - no one will ever notice unless you tell them.

Anyway, I heard someone say one time that there should be at least one mistake in every quilt - because only God is perfect.

Glad you are keeping busy. Praying for you and your family. Hugs,
Mickie

my dearest jean....lynn is right...leave it alone. we all make mistakes, though the quilt is perfect. i think you got some excellent feedback today, too.

i completely know what you are going through. my prayers are with you and i am always here with big shoulders for you to cry on. but you know, God will protect your dear boy....he did for mine.

I forgot to tell you- I absolutely adore the fabric for the new quilt - wonder why???

Oh for sure.. leave it the way that it is.. some of my most charming antique quilts have "inconsistencies" and I love to wonder what was going on in the quilters life. You and your family are in my prayers.

Oh, I finally figured it out! Whether to fix it is a tough question -- it took awhile to find the error, so, I'm thinking most people wouldn't notice. But, for me, since I would know about it, I might have to fix it. Will it drive you crazy? Can't wait to see the stunt sewing!

Oh, and shoot! I forgot to mention your son. I hope everything is going well and that you won't worry too much. XOXO

Popped randomly across your blog and happened on your conundrum.

I am by no means and expert...actually a complete quilt novice....however I agree with the other posters and I would say 'leave as is!'. The quilt is beautiful and I think it looks amazing draped across your wicker chair. I didn't actually notice there was an error and am still struggling to.

You will always remember this quilt because of this mistake...not mistake..um....creative uniqueness!

Oh my gosh, you have got to tell me what happened on that retreat!
Hope all is well.