I don't know about you, but I think that this summer has gone way too fast!!  I had such plans to do so much.  Sadly, I didn't get many of them done.  Whose to blame?  Me!!!!  Oh, well.  Here's to a cooler and more productive fall.

I haven't been doing much sewing of late.  At least not nearly as much as I would like - or should be doing.  I have a baby quilt to crank out and some bags to cut out for a sew-in at a local shop for charity.  Then a quilt for my grandson.  When I get all that done I hope to make something for myself!!  Yesterday I got together with two friends to put together a quilt for a gal we just met.  I don't want to go into details until we give it to her.  Not that she reads my blog, I'm sure.  I just want to be careful.  We decided she needs and deserves a warm hug from a quilt.

Darcy and Carol are the two gals I sewed with yesterday.  We meet at Darcy's periodically to make things like the tote bags I blogged about earlier this summer.  Just scroll down and you'll see them.  What I find so admirable about these two gals is the amount of charity sewing they do.  They belong to the Firehouse Quilt Guild that Pat was so nice to blog about here.  They also sew dresses and bags on a regular basis that are donated to women and children in Haiti.  Every month they pick a new charity to sew for, making hats for the homeless,  backpacks for foster children, bags and quilts for the local Children's Hospital for the little cancer patients.  Even beds for rescue cats.  Well done, ladies!!!!!

In all of this, they actually make time to make something for themselves. They deserve it, don't you think?  I had been going through my patterns one day and came across Miss Rosie's Schnibble pattern, Darcy.  I decided it needed a new home, and should go to my friend, Darcy.  She was thrilled to get a pattern named after her!  (We laughed, because we agreed it was more than likely named after Mr. Darcy of Jane Austen fame!)  Her all time favorite quilt star is Eleanor Burns so she made Darcy using Eleanor's fabric line, Ellie Ann.  A perfect Jane Austen marriage, don't you think? 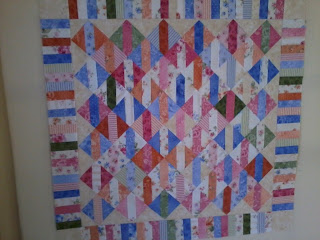 Isn't it the prettiest thing?  The colors remind me of sherbet ice-cream.  She still has to quilt it but I wanted you to see it now.  I'm sure Carrie and Eleanor, along with Mr. Darcy, would be pleased.

We're in for another hot day here today.  I have been busy of late so I'm taking the day off to "chill" before doing some work around the house this weekend.  It is Labor Day weekend, after all.  I'm going to watch some British murder mysteries dvd's and maybe try to get some reading done.  I think there may be a nap in the mix as well!

Have a wonderful weekend and drive safe if you are travelling!!!  Maggie sends her love!
Posted by Miss Jean at 12:53 PM

You're such a sweetheart Miss Jean! It sounds like you have the perfect Labor Day weekend all lined up!

A fantastic blog with a lot of useful information. I would love to get updates from you. Keep blogging. All the best.