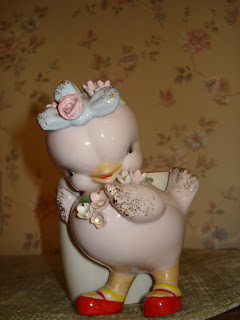 Some things are just meant to be. This darling little girl was at our local thrift shop. I went back three times and finally decided that she was being patient and waiting for me to take her home. I think I'll name her Kelly..... 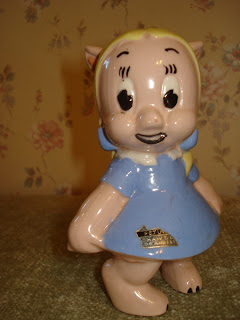 I've had this little sweetie pie for years and years. I recently saw one in a local antique store. When I saw the price tag they had on her I got her out and put her in a place of honor! Not that she isn't worth it anyway. She's famous, don't you know! 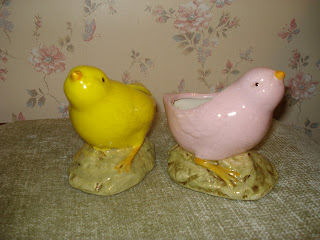 These two little darling peeps were found at a local antique store for a song (cheap peeps?) I think that they are just adorable! 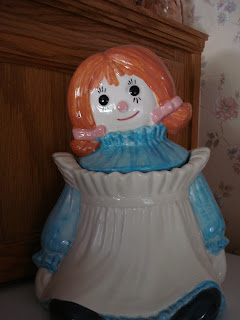 Last, but not least, is Ann! She's my main peep. Sweety bought her for me before we were married. That was over 40 years ago. I have her brother, also, which you'll get to meet later.

I hope you all had a fun filled weekend. I have a half busy, half restful week lined up. Hopefully I'll be able to get some yard work and sewing done. There's also a bavarian creme filled maple bar calling my name, so I gotta run! Bye!

I think Kelly is very cute! Is she a vase? I have some very similar figurines that were my Grandma's. (pink, with gold accents and flowers such as these) They are all different little animals.
Love all your cute collectibles..
xo

Red High Heels...how cute for your sweet find! Jean, I have not seen that adorable lil' girl! I'dve snagged her in a hot second!!

Hope you are enjoying your day and that that Bavarian Creme filled yummers was awesome! How is my niece doing today? We had a blast with her yesterday! Was a fun day having her here and Duhgall is worn out!

You have some pretty awesome peeps Miss Jean! I especially love the cheap peeps and that Raggedy Ann -- can't wait to see her Andy!