No, this is not my Halloween post. It's the continuing sage of Little Miss Maggie, the very expensive Scottish Terrier!!!! I knew that she was having trouble with one of her nails, so when I took her to her bi-weekly spa day treatment (I kid you not!) I asked the girls if they would check it out. When I picked her up later in the afternoon, they said that her dew claw was split right in two. I took her right over next door to our vet's office. They own the grooming salon/kennel so it's really handy. Our vet took it right off, wrapped it up and gave her antibiotics. "Keep it clean and don't let it get wet!" Has he seen the weather reports? Anyway, I have to keep an eye on it but it should heal just fine. I read up on dew claws and I guess some breeders remove them and some don't. Since it's really easy to remove them when they are first born and can cause problems later I can't imagine anyone not removing them. If I'm wrong, let me know. It had been so long since we had owned a puppy that I didn't even think to ask about them.

I always used to give her "dental cleaning type green bones" (don't want to give product name here because I have no problems with them per se) but they started making her sick so I had to stop. So now at some point I'll have to take her in for teeth cleaning and they'll put her out for the procedure. When that happens I'll have them remove all her dew claws. 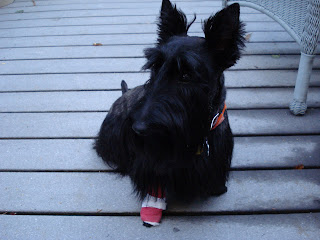 Is this the most pitiful looking little puppy you have ever seen? This certainly has not been her year. I should make her a little cardboard sign, "Will bark for medicine!"

I hope none of you think that Maggie is not well cared for since she has had so many problems this past year. On the contrary, I tend to take her in to be checked even if it's something minor. She eats the best food I can buy her. She is shown lots of love all the time and lives in the lap of luxury. My theory is that if you have a pet take care of it. It involves expenses. If you can't afford to properly care for them, don't have a one. That should be a no-brainer. I'm really black and white on the issue of pet ownership, no gray area! Pets depend on us to take care of them. My daughter just got a rescue dog, Bella. She's the sweetest little thing and sort of looks like Toto from the Wizard of Oz. Whoever owned her really did a number on her. This poor little dog is so very afraid of new people and still hasn't warmed up to me. When I go over there she hides under the bed. I can't let her be around Maggie as she is so timid and Maggie is so, shall we say, out there that she would be frightened. She cringes and hides when you pick up a broom. I get so angry even thinking about what someone must have done to her to make her like she is. But with lots of love and patience, I know she'll eventually come around.

I agree with you about dew claws. When our puppies are 3 days old, we talk them to the Vet for their first visit - and he removes their dew claws then. That spot heals up so quickly and never gives them any problems. Ruairi is the only dog I have that doesn't have his, but if I ever have the others put under for anything, I'm going to have their dewclaws removed then. I'm always scared they might catch them on something and rip them off. Maggie should do fine from her little ordeal.

Have a great day,
Lynn

Get better quickly Maggie! I am with you about pet ownership. I don't have a pet right now, but they are definately one of the family when I have had one in the past.

Do you know, I think you can get pet insurance...not sure if it is costly though.
Hugs,
Penny

Understand totally. Our maltipoo is allergic to grass and has allergies just like a human. The vet dermatologist did a skin test.
They mixed serum and he had a shot everyday for 9 days. I did 5 days and then we could not hold him down so off to the vet at her home. We did this for a year and didn't really see any difference except in the checkbook. Now he is on an allergy med and an antibiotic daily because he breaks out like festered pimples and then turn black and they itch and he scratches and licks and we pull our hair out. Every vet and specialist have agreed that this is going to have to be our daily routine - as well as special food.
He is so nasty when they are bothering him but so sweet when he's comfortable. Love him!

Ahhhh...poor Miss Maggie....give her an extra hug from me and Carson! I'm am TOTALLY with you about taking care of our pets. My babies are part of the family and I would do anything I could for them. Pets are a huge responsibility and I don't understand people that think they are disposable, take their responsibility lightly or give them away at the first sign of issues. Miss Maggie sounds like she leads a very nice life......bi-weekly spa days ....ahhh....what a life! Take care of that sweetie and keep us posted. :)

I don't think you have to worry about anyone thinking you don't take care of your sweet Maggie! I'm not letting Jesse read this as he will see just how ill treated he is!!(He thinks everything is just wonderful- so grateful he is a low maintenance dog!)

Oh dear.....did this happen after I saw you the other day? Give that Maggie and extra tight hug from all of us. Fiona has her dew claws, too. Maggie is blessed to have you for a mommy. You are right, they are our responsibility. I am right there with you on pet bills!

They looks so pitiful already

My first scottie, Katie is from Nebraska and had her dew claws removed when we picked her up.. Fiona (Idaho) did not and the breeder says she never removes them. So far no trouble but I wish that potential was also removed. The fur sisters greeted all trick-or-treaters at the door and I am sure Maggie was right there too. (Had to hide the chocolate tho')

Thanks for visiting The Scottie Chronicles and leaving Us a note.

I still have my dew claws and now that I think about it, I wonder why. Huuummm....

I know it's time to have my nails done when my dew claws start to curl up or get pointy sharp! YIKES!

Roo Roo, Stuart
PS That sure is a sweet picture of you. Pitiful, yes, but sweeter, you bet!