First of all I'd like to thank all of the get well wishes I received. I've been taking it easy and my back is getting better.

Two weekends ago the quilt group I belong to went on our annual Lake Tahoe Quilting Retreat. The family of one of the gals in the group has a condo that they generously let us use every year. It's about a three and a half hour drive from where I live and worth every mile! We usually car pool and caravan up. This year most of us left on Thursday morning with the intention of staying until Monday. We stopped for lunch in Truckee, California here. You may have seen this restaurant on Diners, Drive-Ins and Dives. It was great!!! 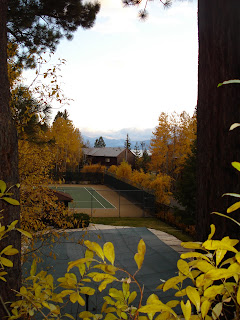 This is the view from one of the balconies. See Lake Tahoe in the distance? Breath taking! 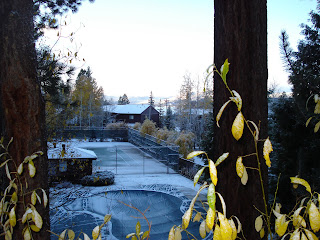 This is the same view a couple days later. We had quite a bit of snow. My car doors were frozen shut! By the time we were ready to come home the roads were plowed and safe for travel. Although I wouldn't have minded being snowed in for a week. 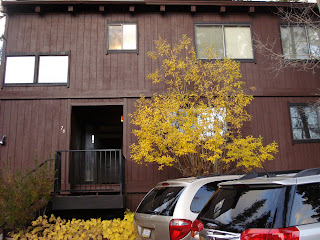 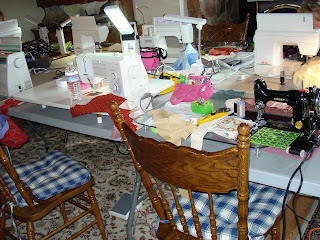 There were nine of us for this retreat and we had our sewing machines set up in the dining room and living room. When we get ready to go up there we make menus and go shopping in Tahoe City. We take turns cooking and cleaning the kitchen. Great food, great company, lots of laughs!! 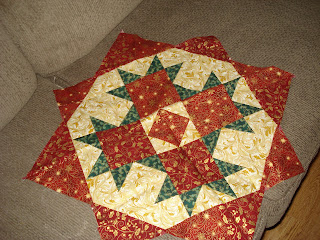 I didn't get a chance to take pictures of every one's projects. This is a table-topper that Wanett made for Christmas. I can't wait to see it finished. 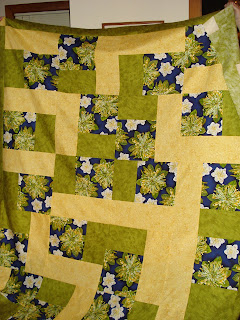 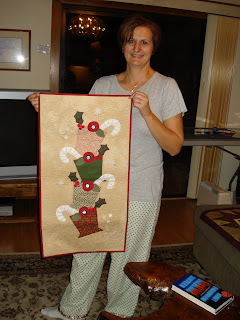 Heather with one of her Christmas projects. She made two! (Yes, we hang around all day in our jammies!) 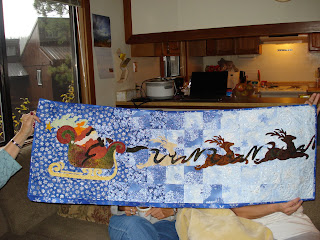 Another of Heather's wall hangings. Nanci made one just like it as well. See the kitchen in the background? Soup cooking in the crock pot. Yummmmm! 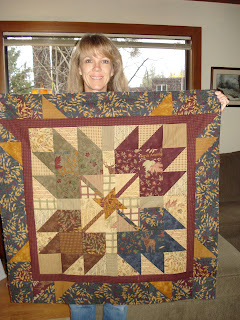 Marian's fall wall hanging. The backs of her projects always look just as pretty as the fronts. 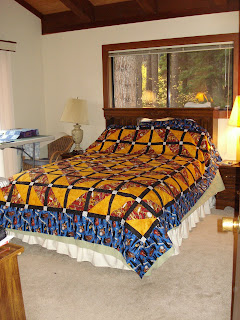 Debbie made this for one of her grandsons. 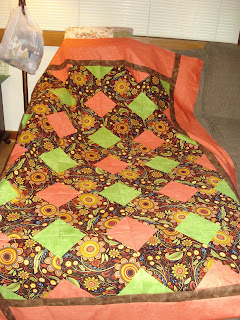 Another of Debbie's projects. She is a speedy sewer!! Me, I"m sloooooooowwwwww. 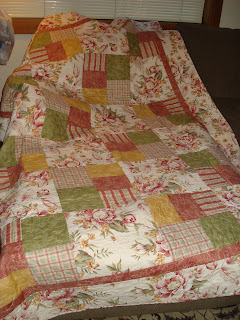 I had this quilt finished and just needed to stitch down the binding. It was so relaxing to sit and do hand stitching with the snow falling and football on the television. Football!?! Yes, we have some football fans but they kept the sound low. 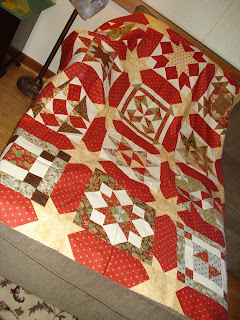 I worked on one of my Fat Quarter Shop block of the month projects and got the sashing strips sewn on. I just have to put on the outer border. I'm calling this project "The Pointless Wonder". Boy, am I out of practice!! Chopping off points and we won't even go into how messy the back looks. But once I get it finished and quilted, it'll be just fine. I worked on another quilt for my son but forgot to take a picture. It's a Chinese Coin pattern made with Civil War fabrics. I want to send it to him while he's deployed if he'll let me. I have to ask first 'cause guys are funny, he's an officer, and he may not want a "quilt from Mom" on his bed. If he doesn't want it sent to him, I'll save it for when he comes home! (Stay safe, Aaron!)

Now to show you the excitement we had. When you are up in the mountains, you always, always lock down your garbage. You always take any and all food and/or food scented items out of your car if you are there overnight. Why? Because of the BEARS! Someone in the complex had put their garbage in the dumpster but hadn't chained it shut. One morning Heather noticed that there was trash in the drive-way and we knew we had visitors in the night. As we watched from the safety of the condo, here they come again! Mama bear and her two cubs! We stayed inside and watched as they checked out the trash. Then they decided to leave and headed for the highway. When she got to the road, Mama looked both ways before crossing but the cubs just ran across. Typical! 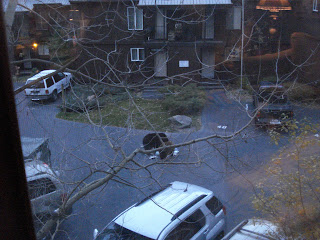 See the car on the right? That's my van. Right next to that is the downstairs bedroom window where I was sleeping when the bears initially got into the garbage!!!!! Yikes! 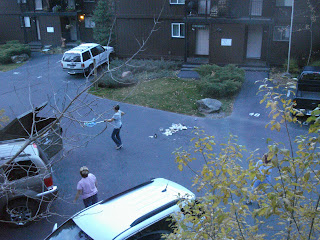 After the bears had been gone for a while, Heather went down to clean up the garbage That's Cindy and Debbie standing guard. My question is, whose gonna guard the guards!!! That night as I was in bed I would hear a leaf rustle outside. "Bears!!!"

We all got lots done, had great food, laughed a lot and had a great time. Our next retreat is scheduled for February in the foothills near Sonora, California. Hopefully, this time, there won't be bears!!

Oh Miss Jean! It sounds like you had a wonderful time. But then, what's not to love -- good food, friends, quilts, snow and BEARS -- woohoo!!!

Wow, you ladies got some serious quilt projects done up there and made some fun memories too! Lurve the bear pic! ha ha

Sounds like you had a blast, as always! Nothing beats getting some projects done in your jammies. Been doing that all morning. Time to get dressed - tis 1 PM already!

glad yer back is better!! i am having sympathy pains!!

What a delightful surprise I had this morning when I logged on to the ole blog! Thank's for stopping by and leaving a comment. I have been lurking around your blog for a while now and I have to tell you...your Maggie and my Libby are two peas in a pod.

Love all the sewing machines. What a fun retreat that must have been!

Have a great day!
Nancy

What a bunch of creative ladies. The quilts were all beautiful. I love Tahoe but I've never seen bears, even when we stayed in cabins! There must have been some good scraps in that garbage. Glad to hear you're feeling better. Have a Happy Thanksgiving.
DAwn