Last weekend we had a bar-b-que at our house with family and friends. Not only were we celebrating our son's return from deployment, but it was our daughter's birthday as well as our grandson's birthday two days previously. We had a blast with lots of great food and fun. My niece just took a cake decorating class and volunteered to bring dessert. 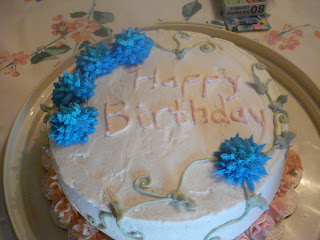 She made a strawberry cake for Dory and Redmond's birthday. She didn't know that strawberry was Redmond's favorite. Boy, was he happy! 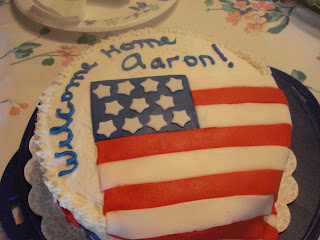 She also made a chocolate cake complete with rolled fondant for Aaron's homecoming cake. Thanks, Jamie, you did an awesome job! 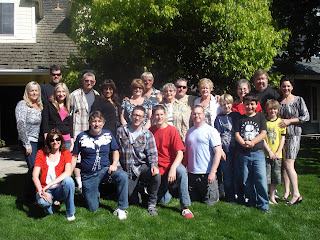 Here's the entire family. It's the first time we've all gotten together to take pictures like this. That's my Mom in the middle, along with her three children and their spouses as well as her five grandchildren and her five great grandchildren!
How cool is that?
If you are counting children in the picture, you come up with one extra. The little guy in the black shirt in front on the right is the cousin of a family friend. He was so excited to be there he wanted his picture taken as well. So we made him an honorary cousin! Welcome to the family, Jacob!!!
Also, you may wonder where Maggie is as she's not in the family picture. Every time we have a bar-b-que at our house she goes to the local kennel to play. She's a "flight risk" and with everyone going in and out all day I am so afraid she'll get out and be down the road and halfway to L.A. before we can catch her. So she misses all the fun, but I feel so much better not having to worry about her.
Posted by Miss Jean at 12:12 PM

What a beautiful photo!!

I don't blame you for sending Maggie to the spa. When we have events like that, our guys get kenneled and get to come out one at a time on leash - I'm so afraid they might just bolt if no one were paying attention - it makes it easier to enjoy your guest when you don't have to worry about a dog.

PS - the cakes are lovely!

Looks like a wonderful time! I know Connor enjoyed seeing Maggie at the spa that day. Glad your son is home.

It looks like you had a wonderful time Miss Jean. Your niece's cakes are beautiful -- I'll bet they were delicious!

Sounds like it was a wonderful party! And what a great looking bunch! Smart move on your part to give Miss Maggie a "play day" at the kennel. Our cat escaped one day when we were having a get together at my house. He came home but it scared me to death. Take care-

Jean how wonderful that you had so much to celebrate!! I am so glad that your son is safely back home!

What a great family photo!! Loved seeing you and your family- I think you need to cut and paste in Maggie!

Miss Jean you have just been the busy bee, I have been away from my blog for the last two weeks. What a lovely party you all had and the cakes looks beautiful!
Miss Maggie is one very lucky girl, having her hair done so often and a spa day..I want to be Miss Maggie.LOL
Did you take the train to Denver?
How wonderful to have spent time with the family.
Have a blessed and happy Easter!
Big hugs, Elizabeth

Sounds like a wonderful time, and those cakes look wonderful!

I am so behind in my visits here!! Your niece did a fabulous job on the cakes! Wow! I can appreciate the time and effort that takes and I bet they tasted even better because they were home made!!

I lurve the family photo too! You all made a memory!