Another chapter in the Maggie book....

Today my Sweety and I went out to breakfast. I had gone to a great place near here with friends yesterday and thought he would really like it. The girls and I had all taken our little Scotties so we ate outside on the patio. Guess whose little one peed on the floor? Eenie, Meenie, Minee, MAGGIE!!! 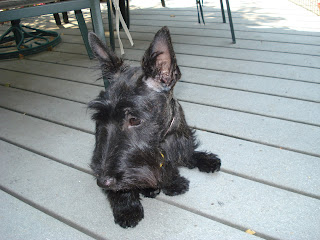 If they can't look you in the eye they are guilty!

Since it was nice outside Sweety and I decided to leave Maggie in the back yard while we were gone. She was very safe, had plenty of food and water, and her crate with her favorite toy was on the shady covered patio. All fine and dandy, right? Wrong. She chewed one of my drip system sprinkler heads. I say "one" loosely as now I have to go inspect the entire yard for gushers. Her big sister does the same thing at her house so it might be a family trait. 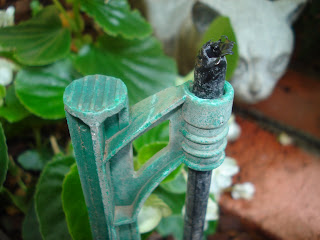 From now on when we leave the house for a few hours it's gotta be jail time in the "big house". We have lots of law enforcement friends so she better mind her p's and q's! 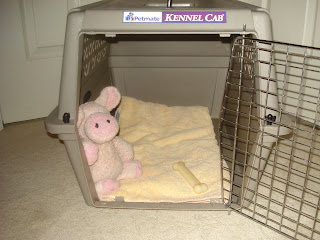 If you can't do the time, don't do the crime!
*Maggie Update: Let's make that two sprinkler heads!
Posted by Miss Jean at 5:16 PM

Everything we love in, Scotties. Adorable, independent, always doing the unexpected, and did I say adorable? Oh my she is a lively lass. How great that she can spend time with her sister, too. Are the other Scotties related? I have a friend in Kansas, that has two Scotties, but none in Indiana, and none here. :-( I would love a lunch date with friends and Scots! She is so pretty, Jean. Did your husband like the restaurant?

I have a naughty puppy too. His name is Spencer and he is a 6 month old poodle. Because of his penchant for chewing things he has to spend time in his crate when we are away too. If he wasn't so cute he'd been in a lot more trouble. Your little Maggie is adorable! Twyla

She looks so sweet and innocent there.

Hmmm...I think Maggie and Abby may be long lost relatives. Abby is always the one who makes little mistakes where ever we go. She sure knows how to embarrass her mommy! But like Maggie, it’s hard to stay angry when they are just so darn cute!

A little jail time may help straiten the little rebel rouser out though! :-) Her jail cell looks quite comfy though!

OH DEAR!!!!!! Well, all I can say is I hope it is a phase she is going through, like Maude. You will have to do what Wave did and growl at her!! Wave took Maude to the scene of the crime and scolded her there. No handcuffs or non lethal force was used though. Just a good Alpha Dog growl...GRRRRRRRRRR.....SNARRRRRRRRL!!!!! Scotties do like plastic - as you know, Doogs loves to chew up those squeak toys. I know if he swallowed a piece by squeezing his belly and listening of the squeak! haha.

Had fun with you the other day!!! We will have to bring Mags a pee mat. :) At least they had a hose! haha

Oh how Sweet....now how could that sweet lil face be a guilty one? LOL
I hope you are having a great summer!
Blessings,
Robin

How funny Miss Jean! Sorry about your sprinkler, but I'm sure that Sweet Miss Maggie didn't mean it.

Two?? She may grow out of some of the chewing yet, Jean. In the grand scheme of things though she has to be one of the biggest delights to have around. I've been itchin' just a tad to find another Scottie. Sometimes, I wonder if Baxter, wouldn't like to have a playmate. We got Baxter, from a breeder. If I got another puppy, I think I might like to rescue one.

I am eager to hear of Maggie's, next adventure. And keep those photo's coming!

Oh, my goodness!! She must get bored easily! I used to always crate both of mine when I left. After they were about 1 year old I started leaving them out. I have an award for you. Please, stop by!
Hugs, Terrie

This is a cute story, even if Maggie was naughty. She's so cute and she does have an "I'm sorry" expression on her sweet face.

Thanks so much for commenting on my 200th post!

Have a great rest of the week!
Pat

Oopsies little Maggie.....but you are growing up so adorably. Mommy can't stay mad at you for long. You'll grow up soon enough.

Hugs to both of you,
Lallee

Sorry about Maggie chewing the sprinklers. She was upset you left.I have a Rat Terrorist and he gets upset too when I leave but usually just gets mad at me. It never lasts long though(-: I enjoyed reading your blog. I hope you have a great vacation!