We took our Grandson's, Redmond and Samuel, on vacation last week. We had a blast! Since we live in Central California and the weather has been unbearably hot, we headed over to the coast and Monterey. We're lucky that it's such an easy drive from here. We got up early, dropped off Maggie, stopped at McDonald's for breakfast and off we went. 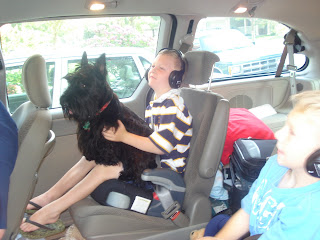 First and foremost I want to thank the wonderful lady who watched our Little Maggie while we were gone. How lucky are we that the one and only BECKY from Sweet Cottage Dreams (I know, OMG!) is not only a close friend but loves our little Maggie to pieces!!! She and her hubby, along with Dughall took loving care of Maggie while we were gone. ("You can't put her in a kennel!! I'll take care of her!") Maggie had such fun playing Scotty games with Doogs and attempting to terrorize their cat that I am a little concerned that she'll be lonely here with just me and Sweety. Bless Maggie's little heart, though, she laid on the bed yesterday while I slept. In fact, she's supposed to be Sweety's dog but she follows me around everywhere but that's a post for another day.

Our first stop was Casa De Fruita. This complex started out one hundred ago as a produce market and has blossomed into quite a fun place to go. They have a restaurant, gift shops, a train to ride, a carousel, playground, and animals to see. It's low key, certainly no Disneyland, but the kids had such a good time there that we stayed for about three hours. Sometimes simple is good. 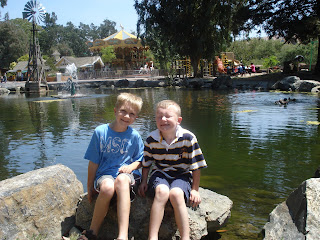 Open your eyes, Samuel!
Then it was off to beautiful Monterey where the weather was forty degrees cooler than here! We went to: 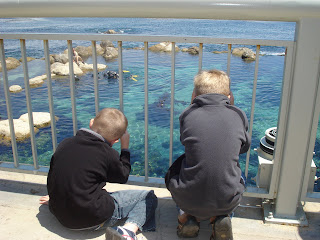 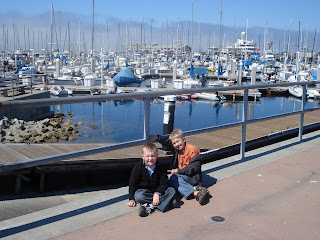 We walked along Cannery Row and Fisherman's Wharf (ala John Steinbeck) 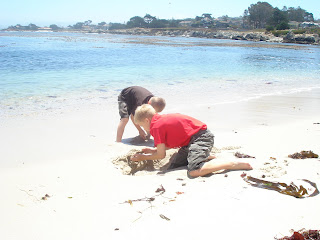 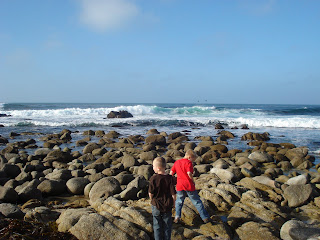 Went to the beach 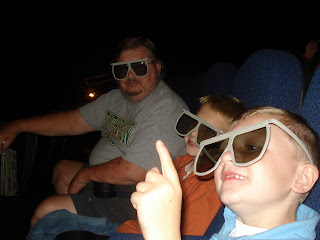 Took in an Imax 3-D movie 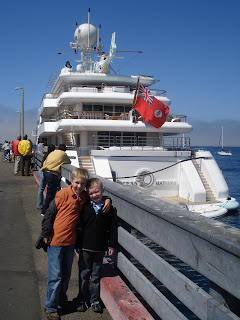 We even saw a HUGE! DOUBLE HUGE yacht complete with a helicopter. We later found out that it now belongs to a telecommunications billionaire (with a couple B's!) who is the richest man in Mexico. Awesome! 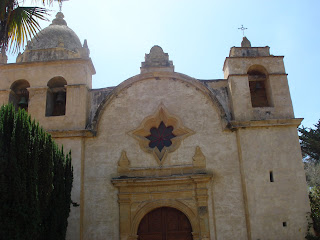 Then we drove down to Carmel to one of the Missions. In California all fourth graders have a unit in school on the California Missions which were founded by Father Junipero Serra in the 1700's. We thought it would be good for Redmond to get some exposure before school starts. 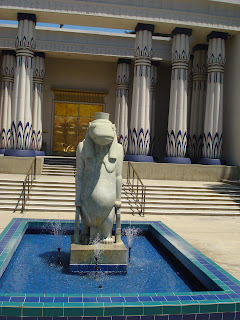 Thursday on our way back we stopped in San Jose at the Rosicrucian Museum. This place is fascinating. It has the largest collection of Egyptian artifacts in the Western United States. 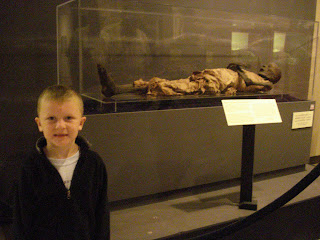 "They have real live Mummies, Grandma!" 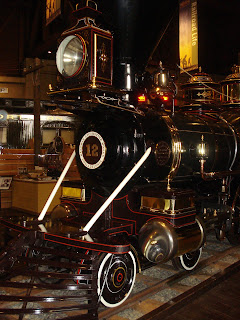 We got home late Thursday to rest up and do laundry. Then on Friday we drove to Sacramento and took the boys to see the Sacramento Railroad Museum. They have huge steam locomotives, rail cars, and lots of fascinating things for little boys of all ages to enjoy!

The boys' dad lives in Sacramento so he met us in Old Sacramento and took them for the weekend. Sweety and I stopped for dinner, picked up Maggie and got home late Friday night.

One thing I did in Monterey that I am so proud of is that I paralleled parked! Woo Hoo! Parking is at a premium down there and when you find it you take it! I have no depth perception because of an eye "thing" but Sweety talked me through it. I'm sure there were people wondering "why is that lady standing next to the car clapping?"

I am so blessed that we were able to do this with the boys. It was trying at times, of course. Sweety says it was like herding squirrels! But I would do it again. We're planning on taking them on an Amtrak train ride next. We also want to do individual vacations so we can devote more time to each child.

Moral of the story? If you have grand kids, become part of their lives! Do it now! You won't be sorry.

All those places are so fun!!! I haven't been to Casa de fruita in years, but now I'll have to go. Love the mission stuff, love the aquarium and Monterey, the museums.. all good. fun with kids, extra good! Glad you had fun!

How Fun Miss Jean! It looks like you had a wonderful time. You're so lucky to live in such a beautiful state with so many wonderful places to visit!

Looks like a wonderful place. I have never been to that area. Don't you just love spending time with the grandkids?

What a wonderful trip! Love all those places. "Live mummies"!! that cracked me up.

You and Mr. In The Garden are WONDERFUL grandparents!!!! Your little guys are so blessed to have you both to share their summer with. These are times they will cherish forever - but I have told you that before, huh? :)

Give Maggers a hug from us. We miss that lil' stinker. Doogs is napping now...

Love you to pieces and thank you so much for the pretty scotty gifts!!!! I LOVE them!!

Sounds like you had a great time and visited lots of interesting places. I am sure the boys appreciated it!

Morning Miss Jean...what a great trip with the boys and your sweetie too:). I enjoyed traveling with you.

Wonderful memories to hold near and dear to your heart. Hugs, Linda

We went to a couple of missions in Calif. we plan on getting to this one you went to, in a few mo.Laurie

Hi Jean,
Your getaway sounds like a lot of fun.. That's wonderful that you have these fun memories.

What a fun trip! So many wonderful places. Thank you for sharing. Great pictures.

What a nice vacation you had! There's something so beautiful about the blue color at Monterey.