Hot Time In the Summer

Keeping two little boys busy in the summer is a full time job especially when it's hot outside like it has been lately. 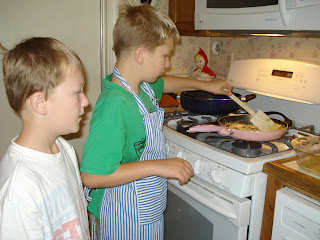 One thing I let them do is cook. They love to make their own breakfast, especially our oldest grandson. "You can't do this, brother, you have to be a professional!" 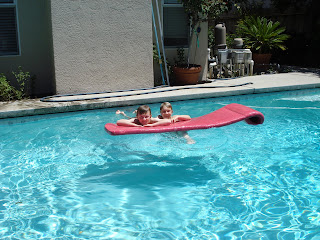 A dear friend of ours has a pool and she graciously let us come over last week so the boys could swim. They had the best time. The youngest learned that since he could swim in the shallow end he could also swim in the deep end. He was so proud. I sat under an umbrella and sipped ice tea and tried to stay cool. Hot sun and my fair skin just do not mix. 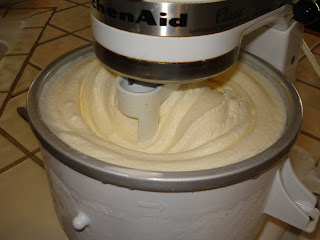 I know that lots of you out there have a Kitchen Aid mixer. A great investment is the ice cream maker attachment. You make your mixture the day before so it's good and cold and you freeze the bowl overnight as well. Pour your mix in the frozen bowl and let 'er mix for 20 minutes. Voila! Soft serve ice cream! Now it says to put the mixture in the freezer so it can set but if you like it soft, just grab a spoon and enjoy. 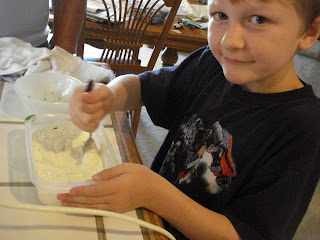 I emptied my pantry of all sorts of additions such as sprinkles, chips, caramel sauce and mints and let the boys create their own flavors. This little guy made Mint Surprise. 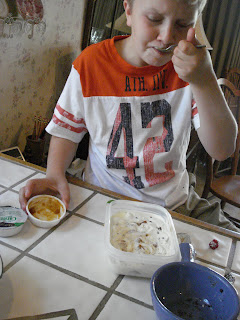 His brother made Caramel Explosion! My kind of ice cream!

Another thing the boys like to do when it's too hot to go outside is crawl up on grandma and grandpa's bed, snuggle under the covers and watch movies. I know that letting them sit in front of a television is not the greatest thing in the world, but they don't watch television at home much at all. So letting them do it here is a treat. I have books for them and games as well. Once a week we try to go on a field trip somewhere interesting as long as it's cooler than home, even if it's just to the movies. What kind of activities do you do for the kids in the summer when it's too hot to go outside?
It's a lot of work for sure and by the end of summer I'm exhausted. Then they go back to school and I always say, "I miss the boys!!!!"

What wonderful memories you are making for those sweet boys.

OH wow! Do you have them for the summer? We have had our on the weekends a couple of times. I just wrote a post on our grandchildren also. They all want to outside most of the time so I just grin and bear it. Hot time in the summer is sure the right title!

They're so cute Miss Jean -- it looks like you're having a good time with them. Especially when you're making ice cream LOL. Oooh, and I see that cute Lil' Red Riding Hood Cookie jar peeking out in the picture -- I love those!

I'd want to spend the summer with you too! What great activities you come up with. Never a dull moment at your place! My Grandma Agnes took care of me when I was little, and they are some of my favorite memories. On a hot evening, she would fill a cantaloupe half with vanilla ice cream for a bed time snack. Yum.

How fun to have the boys for lots of fun and memory time!!

I didn't know they had an ice cream attachment for my kithchen Aid mixer!!! Always learning something new!!

Hope your having a lovely summer- it sure is going by fast!!

Okay, so i'm heading out to get that ice cream attachment for my kitchenaid!!
looks like you're having a wonderful time with your grandsons! what sweet memories they will have of you.

Hi Jean!
Thank you so much for the nice compliment on my quilt, it warmed my heart!
I did the rotate thing with my picture, it is portrait vs landscape in my pictures file, but it wouldn't load that way. I even tried playing with the codes, but it was still landscaped!
Thanks, I will try again
Take care, Leslie lesquilts.blogspot.com

Oh my, they look so much more grown up than last summer's photos!

Looks like a lot of fun memories for your sweet boys. That ice cream is a great idea. I have a kitchen aid and never even thought about buying that attachment. Good idea!

Oh dear, now I must have that ice cream attachment for my Kitchenaid. I never knew such an animal existed. Here in Texas, it gets so hot in the summer that we also tend to watch quite a few movies together. I always think as long as we are making it a family event, the TV watching isn't that bad. Catching a few summer movies at the local theatre always passes the time too. Oddly enough, we get to organizing our house quite a bit during the summer...since we indoors more!
Lovely blog you have.
Maureen