My husband and I have been big fans of British television for years and years. For me it first started with The Avengers starring Patrick McNee and Diana Rigg. I always wanted to be Emma Peel. She was so classy and exciting, everything I wasn't. (Sadly still true!) My husband really became interested when Mrs. Peel left and Tara came on board. I think Sweety still has a crush on her........
We are still big television buffs and have recently discovered some delightful British television series. The Vicar of Dibley is absolutely hilarious. A must watch. Just for the oddity factor, catch Jeeves and Wooster. It stars a much younger Hugh Laurie of House fame. It just goes to show that men do age very well.

Hugh Laurie, right, "before" in Jeeves and Wooster

Hugh Laurie "after" in House

Sorry girls, I was distracted for a moment there.

Our favorite is a delightful show called Rosemary and Thyme. It is about two horticulturist consultants who travel the English countryside to repair gardens. The gardens often times take center spotlight along with the most beautiful English mansions. Sure, someone may be shot with an arrow in the chest or ran off the road, but the show is lightweight. Especially compared to current shows like Criminal Minds and CSI. Do yourself a favor and try to catch these on your local PBS station or order the shows on DVD. They were only on for three seasons, something that we don't understand. We were sad when we had watched all the episodes available. They are charming! 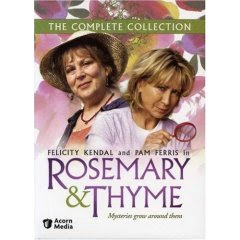 Rosemary & Thyme is one of my favourite shows. We were disappointed after watching all the episodes as well and were so happy we had taped a few :-}
Lovely blog - I found you through "Sweet Cottage Dreams"

I can understand your distraction! I get gaw gaw over Tom Selleck, but your gaw gaw guy is equally stunning!

Will have to check out these shows! Always a delight to watch English shows. Benny Hill still is one of my favs...perverted old geezer!