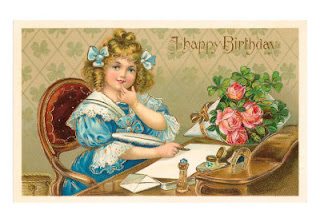 Today is Sweety's birthday. Sweety is truly a sweet man. Low key, patient (he's married to me, for crying out loud, he needs to be), smart, a wonderful grandfather, and lots of other adjectives I can't think of right now. If I want something, "go get it." If I want to decorate our bedroom in all pink," no problem." Do you mind if I go out galivanting with the girls, yet again? "Not at all." Can you help babysit the boys? "Glad to."

Does he complain? No. He could. When he was 34 he had two strokes. He fully recovered, but the doctors never could figure out why he had them. Then two and a half years ago on father's day he had another stroke. This time it was worse. He spent 2 months in a rehab center. That's a nice term for convalescent home. Then physical therapy at home for months. That's why I finally retired early. Even though we had family and friends to help I couldn't leave him home alone any longer without feeling guilty. We're lucky as the stroke did not affect his speech or brain. His left side is weak and he doesn't have full use of his left arm and hand. He can't raise his left foot completely when he walks and he tires easily.

Does he complain about any of this? No.

He doesn't drive a car anymore and had to retire early. Does he complain? No.

He takes like ten medicines a day along with insulin injections. Does he complain? No. Never.

Can I say that I never complain? Heck no. Can you say that? Probably not. He does what he can which includes everything he really loves to do and chooses not to dwell on the things he can't do.

Our 40th anniversary is in August. Is life good? You betcha it is!!

Happy Birthday Sweety! I love you more than you know.
Posted by Miss Jean at 8:04 AM

Happy Birthday to your Honey!

What a lovely tribute!
Happy Birthday to Your Sweety!!

What wonderful words you shared!! He's a lucky man, and sounds very deserving of you, Miss Jean!! Thank you for sharing!! Sincerely, Trudy

Happy Birthday to your Husband! What a wonderful man he sounds like. Give him a birthday hug from me!
Penny

Miss Jean, I tagged you today...come and play!!

Happy birthday to a man who sounds most wonderful~~
Praise God for giving that man to YOU!!

Jean,
Please give your hubbie a big birthday kiss! He sounds like a wonderful man just like my Bob :>)

Happy Belated Birthday to your sweetie -- he sounds perfect. As do you Miss Jean!