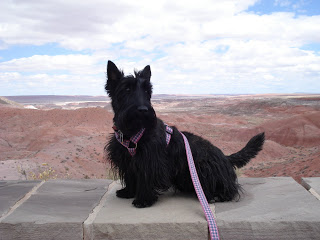 Anne of Bunny Hill has challenged us to take more pictures of our pets.  This is my favorite shot of Maggie, taken a few years ago at the Painted Desert.   Doesn't she look all sophisticated?  She's really not.  She's a silly dog that lives to chase bunnies.  As soon as I can, I'll take a picture of her and post it.  She stands in the kitchen with her head out of the pet door - waiting---watching---hoping!  It looks hilarious.  Also, like I said, we have a pet door.  Dogs can come and go out of a pet door, right?  Not Maggie.  She stands in the kitchen  and lets me know she wants out.  I have to get up and go to the door.  Then she starts this sllloooooowwww motion walk/crawl to the door.  When she gets right up to it she won't go out until I "click" the latch - then she's off like a shot!  She's really well trained.  Oh, yea, I think I'm the one who is trained!

We have basements here so therefore we have basement window wells that are four or five foot deep.  The guys are here now measuring so we can have custom covers made.  They are really good for security.  Don't want any robbers breaking in now, do we?  Mostly I'm having them made for Maggie and the animals.  Last year we had a raccoon in one of the window wells.  It fell down somehow and couldn't get out.  Animal control wouldn't come out so we put a big branch and a ladder down and it managed to crawl out.  Then earlier this summer we had a little cute baby bunny down in one of the wells.  Aaahhhh!  I had to go in the basement and capture it with a box to get it out.  I was afraid it would get loose in the basement which would have been a catastrophe.  While rescuing him/her I found a couple dead rabbits as well.  YUCK!!!  My theory is that Maggie chases them around the corner of the house and wooohhhhooo, down they go!  My real fear is Maggie will fall down as well.  The window wells can hold 500 pounds, are powder coated steel and have quick release latches so you can open them from the basement in case of an emergency.  AND they were cheaper than the ones I looked at at the big box stores.  You can check them out here.

Have a safe and Happy Fourth of July!!!! 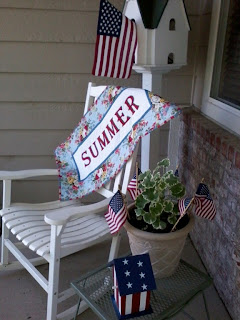