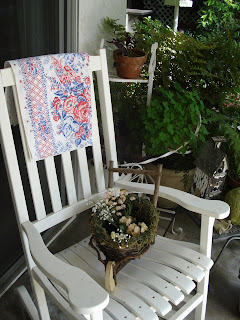 It's going to be hot this weekend in Miss Jean's garden. Hubs and I are going to take a drive and then relax on Sunday.

You do the same, where ever you are. Enjoy your weekend!!!

In The Garden With Miss Jean

I love my new garden shoes!!! 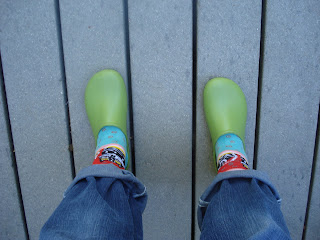 Yes, those are Laurel Burch socks. Quite the fashion statement, don't you think?

Out of the mouths of babes!

There was one fellow on there this week that sang. He was not good. In fact, he was terrible. He explained before he started that he had been singing for 30 years. After he had finished (and had been buzzed off by the judges) my grandson turns to me and with the most serious deadpan look on his face says, "Well that's 30 years wasted!"

After watching the show for a while I turned to him and said, "I think I should audition to be on America's Got Talent! I could sing or dance!"

Ever the one not to want to hurt any one's feelings, he says, "I don't think so, Grandma. I think you should do something else."

"What do you think I should do?"

"Hmmmmmmmm. You should cook! You are good at cooking!"

"What should I cook?"

"Cupcakes, grandma, cupcakes! But that would be a cooking show, wouldn't it?"

"Yes it would. I could still sing or dance on America's Got Talent, though. I'll practice my singing for you." I start singing the first thing that pops into my mind:

He looks over at me with the most serious face and says, "Cooking, Grandma, cooking!"

The next day I walked up to him and started singing again. He just put his head down, put his hands on his head and said, "Oh, God!"

UPDATE: My sister went shopping and wandered in to an Ethan Allen store and found the chair of her dreams. I'll post pictures of it when it arrives.

Oh, and my followers are gone again! Hey Blogger! Is anybody back there!?! Now the followers are back. Must be a server malfunction of some sort.

My sister is looking for the perfect overstuffed chair to go in her tea/sitting room. She has marvelous antiques and even better taste in decorating. The chair has to be just right. Sort of like this darling chair I found a picture of while surfing the internet. Isn't it pretty!?! Pricey, but pretty. 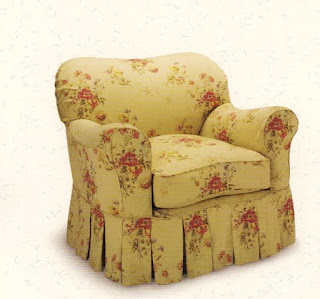 She has asked me to ask all of you out there in blog land for help. Where do you get your furniture? Are there special stores to go to in your area? Do you buy via the internet? Hopefully she can find something in our area. We live in the central valley of California and are not adverse to driving a couple hours if need be.

She used to have a favorite store that had multiple locations in the bay area, including Livermore and Walnut Creek. It was called Blue Tomato. They had the most wonderful furniture that you could have custom covered and she was always able to find out just what she needed. Sadly, they have closed. She knows the city where the former owners live, but can't find them as she doesn't remember their names. If any of you have any idea on how to find them, we would appreciate it. She wants to see if they still have the names of some of their furniture distributors and then, hopefully, she could contact the distributors and find out where they sell their furniture through.

We all know how we want just the right things for our homes and I want her to be successful in finding what she needs.

Thanks bloggers!
Posted by Miss Jean at 8:24 PM 5 comments:

It's been a long, stressful couple weeks here in Miss Jean's garden. My mom has had to have surgery again for skin cancer. All I can say is stay out of the sun and/or use sun screen!!!! Also, with school being out we have started watching the grandson's again for the summer. I love the little guys so much but there is always that adjustment period. Whew, I'm tired.

This weekend I had plans to work In The Garden which is very relaxing to me. I've been doing lots of planting lately and I have lots more to do. 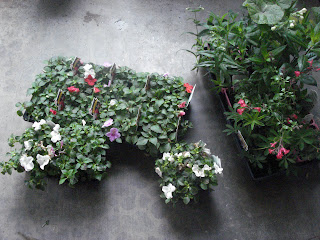 I was going to get these planted.... 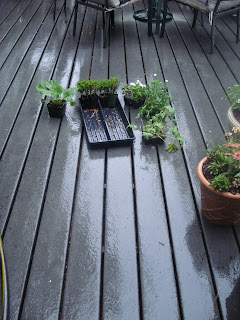 ....along with these. See anything unusual? 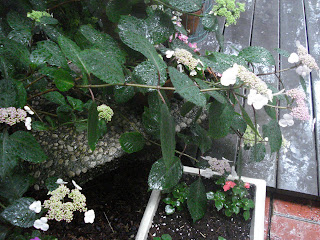 Yep, it's raining! Raining hard!! On June 4th! In central valley California!!! So I think I'll have to go to plan "B", which may just include a nap. I think I like that idea!!!!!
I hope you all have a restful, rejuvenating weekend so we can start all over again on Monday.