With a Little Help From My Friends

I need some help and what better place to go than to my blog friends out there! Sweety and I are planning on driving back to Denver to visit our son. He's going to be leaving for overseas again next year so we want to make another trip back to visit him.

We are trying to coordinate our trip with some things we are having to take care of here on the homefront. We'll either be going in October or November. We'll be driving up Highway 80 across Nevada and Utah, hitting Highway 15 south in Salt Lake City and then on over to Colorado on Highway 70.

I need some advise from all you Nevada, Utah and Colorado bloggers out there. Would it be better to try to go in October or November weather wise? I know that the weather is unpredictable, but generally speaking.

Also, what are the must see places to see, must stop at restaurants to go to?

Thanks so much!!! I know I can count on my blogging friends!!!!!

Did you ever have one of "those" days where, looking back, you should have just saved yourself a lot of trouble and stayed in bed? You know what I mean. Things go from bad to worse no matter what you do. You get up in the morning and BAM! Then another BAM, then another. Whoa, I didn't see that coming! BAM! Maybe it's best when bad things come in clusters. Do it all at once. Get it all over. OK, I can do this.......then BAM!!!!! Is it life? Is it cosmic payback? Is it Karma?

I had an idea for a blog post the other day so I'm going to write about it here today as I'm on the receiving end myself.

Do you ever feel something nudging you to pay someone a compliment and then shoo that thought away? Well, don't! Just jump in there and say it. I really feel that it is God's angels tapping you on the shoulder telling you that that person needs to hear it. We all need affirmation from time to time. A comment such as, "you look so good today!" "love that sweater!" "that was so nice of you to do." may be just what they need to hear. Life may have just thrown them a curve ball and that one little compliment is what they need to hold on to.

We never know what personal tragedies or just plain old bad days people are having to carry around just by looking at them. They may not look like a whimpering mess. They may appear to be the most put together person in the world. But.......tap, tap! Say it, tell her she's wonderful. Tell her you appreciate her. Tell her she looks good. Whatever has come into your mind. Just do it!

So, with that, thank you Anna from the bottom of my heart. You really made my day!!!
Posted by Miss Jean at 5:43 PM 6 comments:

To say that my dad was eccentric is an understatement. He came out of poverty from the hills of Kentucky and worked hard to improve his life, joined the army, served in World War II, worked at Kellogg's of Battle Creek, moved to California and went into business for himself. He flew private planes and doted on his grandchildren. That being said, he did have his idiosyncrasies. One of which was that he trusted no one. Nope, no one. I think in some way that's why I have an analytical brain. I don't take things for face value. I love a good mystery book or movie and try to figure out the solution before the ending. I always credit it to years of reading Nancy Drew but I know Dad has something to do with it as well.

Throughout my childhood I would sit in the back seat of our car with my two sisters listening to Dad say, "That car looks suspicious." He'd write the license plate number in the dust on the dash "just in case" he needed to do something with it. We'd sit in the back and roll our eyes, never daring to say anything to him. He never did anything with those numbers. Just added to them every time we went somewhere. Didn't everyone live like that!?!

I now live in the central valley of California, Almond orchard central. Every year at this time the almonds are harvested. Some nice person doesn't climb a ladder and pick those little nuts one by one by hand. Oh, no! A farm worker, like the one at the end of my street this morning, climbs on board a shaker. It's a devious piece of farm equipment that I swear was invented by Tim Burton, or in the least, could be in one of his movies. 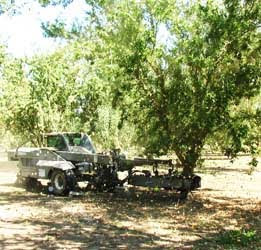 It's driven up to the unsuspecting tree, it's long arms are wrapped around the trunk like a warm September hug, they turn on the motor and WHAM! A whole lot of shaking is going on!!!! The nuts fall to the ground and the contraption moves on to the next innocent little tree and this goes on, ad nauseam. The first time I saw one in action I was driving by in my car and I almost ran off the road and peed my pants laughing as it is quite comical to watch. After the nuts are all on the ground, another piece of farm equipment comes by and sweeps them up, deposits them via conveyor belt into a waiting truck where they are then taken to an almond place and processed. (You can tell by my professional vernacular that I am no farmer!)

One of the byproducts of the shaking is the dust. We have no rain here during the summer growing season so things are pretty dry, dusty and dirty. The dust is everywhere and they even have to put "low visibility" signs on the streets because it's downright dangerous at times to drive through it as you can't see a thing. It makes it's way down the streets and through the fields and into my little house and all over my furniture. I can dust one minute and it's back the next. It's a futile pursuit, but one I keep at because I have the misguided hope that at some point I will triumph!

During this time of year when the morning light is streaming into the house I can see the dust particles dancing in the air. You could write your name in the dust on my buffet in the dining room. Heck, you could write the Gettysburg Address on it! I just look at it and think of Dad and those license plate numbers on the dash.
Posted by Miss Jean at 9:20 AM 7 comments:

I've been having computer problems as well. It started getting slower......and slower...... and slower. It kept hanging up and closing and basically driving me nuts. I took it in to our little town's local computer repair store. I love having a little shop locally that I can trust. They are awesome. I didn't have any viruses, thank goodness. They did put in a new hard drive and a new search engine. I went from Safari to Firefox. Most things are the same but I have a little tweaking to do. If you know me very well you know that I hate change so even a little change drives me nuts. Hmmmmmmmmmm.............

As soon as I get all settled I'll get you all catch up on what's been going on in my little corner of the world. In the meantime, give out hugs. They are free!!!
Posted by Miss Jean at 5:07 PM 3 comments:

Out of the Darkness

This Sunday, the thoughts of the nation, if not the world, will be on the events that happened on September 11, 2001. Our family did not lose a loved one in that terrible tragedy. However, we did lose someone earlier in that same year. 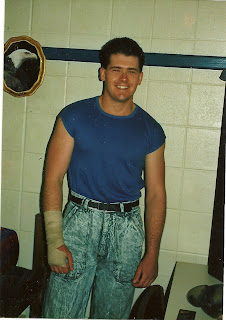 This is a picture of my nephew, Paul, the eldest son of my middle sister. Paul was so close to my husband and I when he was little and it was like he was our own child. He was especially close to my daughter. He was proud of his service in the United States Army and served during Desert Storm. Sadly, on a July day in 2001 when he was just 36 years old, for a reason we will never know, Paul took his own life. Our lives and our world would never quite be the same again.

In the years since he died, I have been so taken aback by the number of people that I have discovered that suicide has affected. It has been a friend, a co-worker, a nurse, a shop owner, the list goes on. Many have had someone in their family who saw, for a brief moment, no way out of their personal pain. They leave behind a legacy of grief and guilt. "Why didn't I know?" "What could I have done?" "If I had only....."

Why do they call it Out of the Darkness? For some, the pain and perceived shame is too difficult to talk about. We need to do all we can to support those around us who are hurting. We need tell those out there that see no "way out" that there is indeed a door of compassion and help they can reach for. We need to let those left behind know that there are others who know what they are going through and that they have our support and understanding.

This Saturday, September 10th, four generations of women in my family, including Paul's Mother, will participate in the Out of the Darkness Walk in Modesto to honor his memory. We covet your prayers during that day. I know it will be difficult for us all. If you see it in your heart to donate to this organization, please contact me via my email and I will give you the information needed to do so.

Thank you so much. 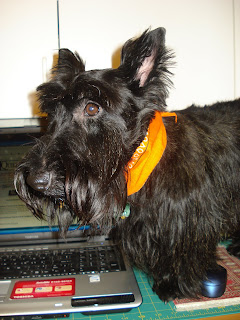 Maggie here. Mommy is taking the weekend off because it's Labor Day weekend. That makes no sense to me since shouldn't you "labor" on Labor Day? Humans! Anyway, she told me I had to work and earn my keep by writing this post. She was mumbling something about the price of dog food and grooming. I hope she goes and takes a nap soon so I can do the same thing.

I'm going to make this short and Scottie sweet. Everyone out there have a wonderful holiday weekend and be safe out there on the highways. And if there is a furry loved one in your family, tell them Maggie says hello!! Arooooooo!