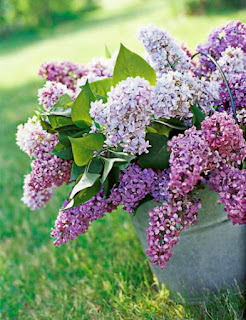 I realize that I haven't blogged much of late.  I posted in January that one of the reasons was that my husband was ill, having been diagnosed with lung cancer in the fall.  Taking care of him 24/7 was my job - my privilege.

On May 7th my sweet husband of 47 years, Skeeter, graduated from the binds of this earth and into the arms of Jesus.  My heart is broken.

I won't be blogging for a while, but I will be looking at all of the blogs I love.  I am sure it will take me some time to adjust to this new life.

I would appreciate your prayers.

Happy St. Patrick's Day from my little green kitchen to you!  Don't you just love this holiday?  Don't get me wrong, I love Christmas and Easter but they both involve a lot more work and thought.  St. Patrick's Day, at least to me, is about the food and fun.  No pressure for gifts or decorating or shopping or any of that.

So at least for today and because there is a Kelly somewhere in my ancestry, I'm 100% Irish! I have the corned beef in the crockpot soaking in a pool of Guinness loveliness. 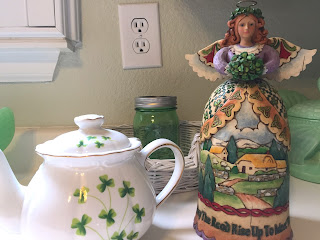 I don't know how I ran across this but look what I found!!! 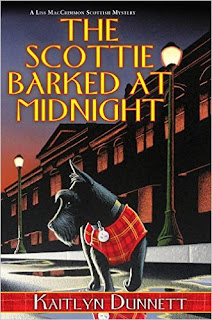 Kaitlyn Dunnett writes mystery books that are Scottish inspired and the main character in this series is Liss MacCrimmon.  I love a good mystery so I ordered it just now on Amazon.  I'll be honest with you.  With a cover like this I really don't care how good the book is.  But if it is, indeed, a good read I'll check out the other books in this series.
Posted by Miss Jean at 9:21 AM 1 comment:

In the past there have been lots of blog posts written about cute little things like cake stands from World Market or Target. Some new item that everyone just has to have.  I usually don't get in on stuff like that as they are usually sold out before I can get to the store.  However, the other day I was at Cost Plus World Market and spied these little cuties. 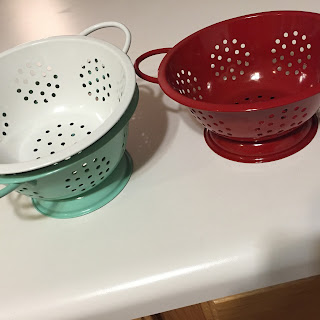 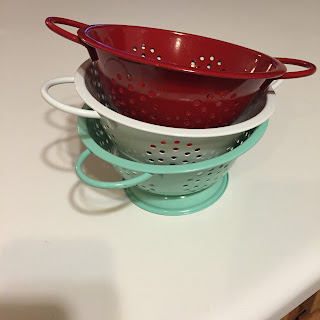 They also have them in light blue, bright yellow and what I call "Nikki" green which is a bright lime green.  It's my best friend's favorite color, thus the name. It was too bright for my kitchen so I got the mint green.  They are the perfect size to actually use for kitchen stuff.  I put mushrooms in the white one the other day so they wouldn't get all mushy. 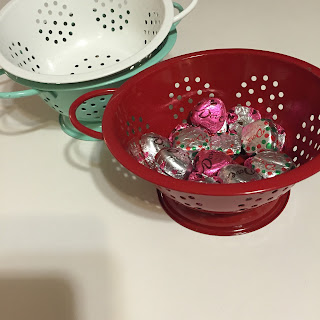 I'm using the red one right now as a Valentine candy dish but admit I put the candy back in just for the picture.  The hubs was eating way too many so I hid them.  LOL!  I can see using them for Christmas decorations or for holding "whatever" in your sewing room.

Go get some and tell them Miss Jean sent you!!

Some of you may have wondered just where the heck have I been since my last post was the end of July. A lot has been going on in my little corner of the world - some good, some bad.  I just haven't had the wherewithall to post anything.  Not to say I haven't been perusing blog land.

On a good note, this past year our son got a new job, a new house and got married to a wonderful woman that we all love. He had been staying with us and since he moved he took the pugs with him.  I admit I cried.  However, our Scotties are so relieved that they don't have to deal with those pesky pugs!  Even Mollie, our rescue Scottie, has come out of her shell.  I didn't realize how much more work they were making for me and how much they were taking over the house.  Dogs have a "pecking order" and it has been restored here with Maggie in her place of head Scottie and mistress of the house.   I can go visit the grand-pugs anytime I want as they are only 20 minutes down the road.

Our daughter and two grandsons came to visit us for Christmas from California. It was so good to see them and see how tall the boys are now - taller than me!  They are such quiet, respectful young men.  I'm so proud of them and the job their parents have done raising them.  We didn't do a lot of site seeing as we had one of the coldest Decembers I can remember in a long time.  They plan on coming out this spring or summer so we can do more then.

Now the bad part.  One of reasons our daughter and the boys came to visit was primarily to see their dad.  I'm not sure if many of you know but he had a stroke in 2005, and along with his diabetes, has not had the easiest past ten years.  But we managed and made do.  He was ill in September and was put in the hospital so he could be administered IV antibiotics for an infection.  When he got home he got pneumonia which they attributed to his hospital stay - lots of germs there you know.  So September through now has been doctor visits, hospital stays, rehab stays, physical therapy, tests and all manner of medical involvement.  I think for November through December he was only home at the most two days.

Then we got the diagnosis that we never saw coming.  Lung cancer.  It was right out of left field and has turned our world upside down.  Our oncologist is staging it between three and four non-operatable terminal Adenocarcinoma.  He has had as much radiation as his body can tolerate because of the location of the tumor.  His latest pet scan has shown that the tumor has shrunk 30-40% which is amazing.  Because of that, the oncologist wants to hold off on chemotherapy for at least two months while he gains more strength and the residual affects of the radiation keep working.

Now, I did say the doctor says it is terminal and that the chemo is only for comfort, not a cure.  However, I have a secret weapon that is not so secret.  I have a God who heals, a God who knows way more than our doctors, a God who knows how many days we have a lot more than we do and a God of MIRACLES.  With that, I 'd appreciate all of your prayers as we go through this journey.  We have had so many people praying for us and I have seen the results.  God has sent so many angels in the form of medical personnel that is humbling to us because it is so very obvious where they are from.

I will try to keep you posted on how his is doing in the months ahead.  I'm not, however, going to turn this blog into a cancer blog.  Cancer is a part of our life, but I don't want to make it to be all of our life.  It's a bump in the road - not the entire highway.

Thank you in advance for your prayers.
Miss Jean