What Have I Been Up To?

Just popping in so you wouldn't think I haven't been doing anything around here lately.  I have been keeping busy with house and dogs and sewing.  There never seems to be enough hours in the day.

Admittedly, the hubs and I have been watching A LOT of Masterpiece Mystery shows lately.  We can borrow them from our local library and also watch them on PBS.  Are there any other Endeavor, Foyle's War, Midsomer Murders, Last Tango in Halifax or Sherlock fans out there?  I must admit I started to watch the new show The Escape Artist and had to stop.  It was much to creepy stressful for me.  I am looking forward to some new Hercule Poirot and Miss Marple shows.  An interesting piece of information.  The British shows that are series are only three or four episodes, unlike the U.S. shows which have many more.  I was particularly upset at the end of the far too short current series of Endeavor which landed (spoiler alert!) Detective Morse in jail!  I'll have to wait a year to find out how he gets out of this one! Shaun Evans is a brilliant actor!

I've been doing quite a bit of Block of the Month sewing and I promise to post pictures soon.  My quilt guild is having one and next month I get my six blocks back from the members of my group and, along with the six more I have made for myself, will be able to have a new quilt for ME!  What fabric did I use?  Fig Tree, of course!  It's going to be dreamy with mint green, peach and mocha colors.  Yum!

I'm also doing Pat Sloan's Globetrotting series which you can read about here.  I'm making mine in Americana blues and reds.  I have to hurry and get this month's block made before the next one is published the first of August.

I have finally finished my great, great niece, Eden's, quilt.  I joke that at least I have it finished before she starts school.  She'll be one in October!  The fabrics are from Lakehouse Dry Goods from my stash and the pattern is from the Missouri Star Quilt Company.  You can watch the pattern tutorial here. 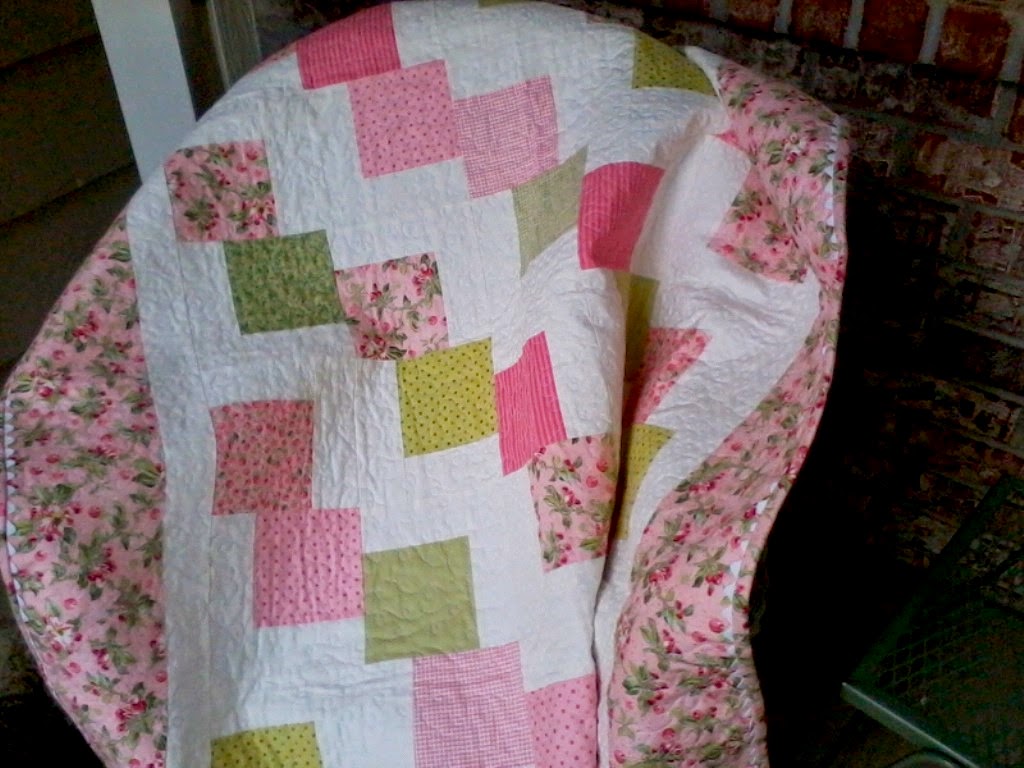 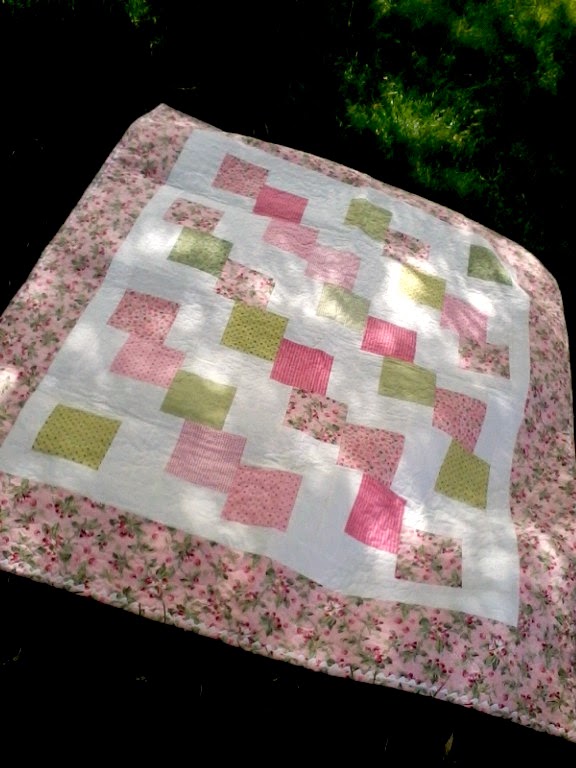 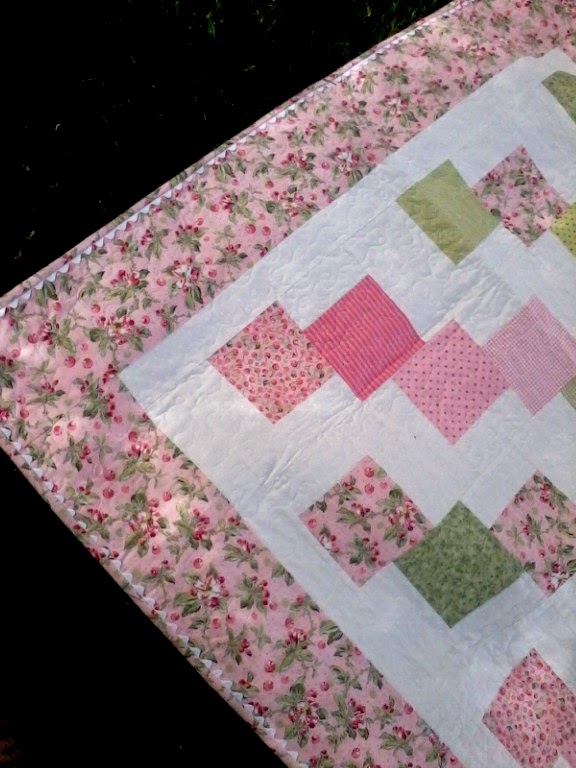 If you look close you will see that I sewed ricrack into the border.  It adds a sweet dimension to the quilt, don't you think?  I used Dream Cotton for the batting and I machine quilted it myself on a longarm that I can rent time on locally.

I also made her a little fleece tag blanket and two stuffed Scotties to match the quilt.  I'll post pics of those when I get everything ready to mail, hopefully Saturday.  Hubs had cataract surgery yesterday so I'm a little (A LOT) behind on things around here.

Gotta go - I hear a cup of coffee calling my name! 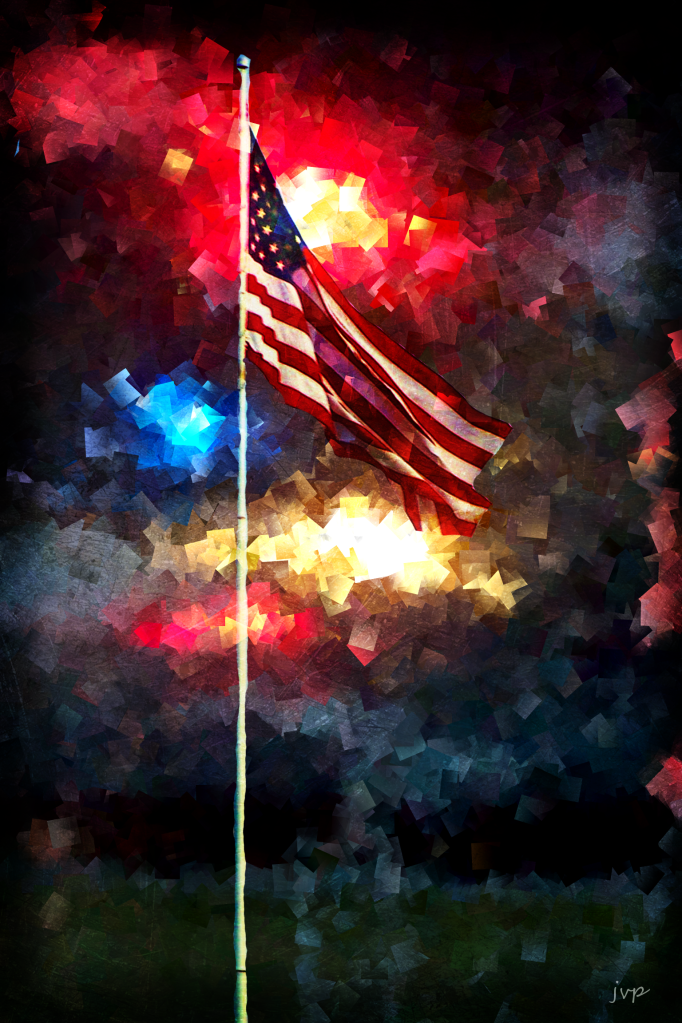 Here in America we are celebrating Independence Day - The Fourth of July - with picnics and fireworks all over this wonderful country.  Do we really know what all the festivities are about?  Do we appreciate what our forefathers and their families sacrificed so we could live in a free society?  It's not all about potato salad, hot dogs and sparklers.  It's so much more than that.  It's standing up for what you believe in, regardless of the cost.

This year, Independence Day means just that much more to our family.  We are also celebrating our son's retirement from the United States Navy.  He has served his country proudly for 23 years.  He enlisted and went into the Navy right out of high school.  After he had been in for a number of years, with the encouragement from his commanding officer, he decided to apply for Officer's Candidate School so he is retiring as a Lieutenant.  He has really taken advantage of all the military could offer.  He has seen the world and has had some wonderful duty stations like Japan and Spain and some not so great duty stations like Bahrain and Afghanistan.  He's also gone to college, travelled, volunteered, mentored and made an entire world's worth of friends.  I can say without bias that he is the type of person you want in your military.  It has not always been easy.  He's had to sacrifice lots to get where he is.  We have spent very few holidays or birthdays or just quiet family time together for 23 years.  A long time ago I had to purpose to give him to the Lord to watch over him when I knew he was in situations that were less than safe.

This is all so bittersweet for me.  For 23 years I've been a Navy mom  I know it's going to be difficult to let go of that.  However, I'm glad he's going to be home and safe and ready for the next chapter in his life. 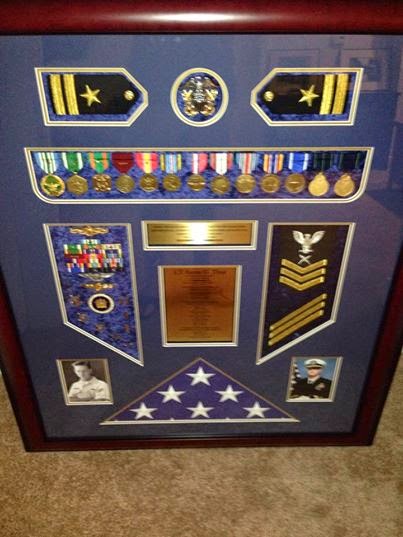 He's been having his retirement celebrations and this is what was gifted to him.  My favorite part are the pictures.  The one on the left is the young Navy recruit, just starting out, not knowing what lies ahead but ready for anything!  The one on the right is the man, the officer that young boy grew to be.

Aaron:  Dad and I and the rest of the family are so very proud of all you have accomplished in the Navy and in your life!


Fair winds and following seas on this next chapter of your life!
Posted by Miss Jean at 12:01 PM 7 comments:
Newer Posts Older Posts Home
Subscribe to: Posts (Atom)