Please remember to keep all those in the path of Hurricane Irene in your prayers. My blog friend, Nancy, of Strawberry Mallard is one of those being evacuated from a home she just moved to. I'm sure there are more bloggers out there that you know, as well as family and friends that are going to be affected.

May the Lord keep them in His protective arms and send angels to calm their fears. 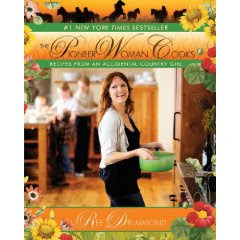 Unless you have been stranded on an island somewhere in the middle of the ocean you have heard about The Pioneer Woman, Ree Drummond. She has become a household name in the blog universe. She has published her life story, written a children's book and put together a wonderful cookbook. She's also currently working on a second cookbook. All this while home schooling her four adorable children, helping with the ranch, becoming an accomplished photographer and doing the occasional public appearance. Last year she had a "throwdown" with Chef Bobby Flay and she won!!! Woo Hoo!!!

Well, bloggers out there, Ree is going to have her very own cooking show on Food Network! All I can say is it's about time and good going to the folks at Food Network.

The show is slated to start this Saturday, August 27th. Check out the link to her show for more information and check your local listings for the time in your neck of the woods. Set your TIVO or Direct TV or sit in front of your television set until it comes on. This is going to be HUGE!!!

*Disclaimer: The fact that I have on my bucket list to either meet Ree or win one of her many contests had nothing to do with my glowing report of her upcoming show. But if it helps.......... 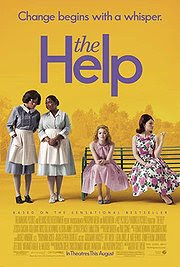 Have you read IT? Have you seen IT? I think if anyone asked anyone on the planet that question right now they wouldn't even have to ask what they were talking about. Everyone knows it's all about The Help right now.

I started to read the book when it first came out. But after a nasty run in with our local librarian I was unable to finish it. (I won't go into the gory details. Just suffice it to say that I don't agree with their renewal policies.) At the time I didn't know what a classic, powerful book it was or I would have broken down and purchased it so I could finish it. In fact I think the only reason I even started to read it in the first place was because the main character's name is Skeeter and that's my husband's nick name. We don't call him anything else.

There hasn't been a time in the past two years that I haven't seen it somewhere either on book shelves, book club reader lists or on book review blogs. Then it was announced that it was being made into a movie and I knew that this was something special that I needed to look into.

My clever sister's (see previous post) friend is in town visiting and I suggested that we go see it. All I can say is WOW!!!! When was the last time you were in a theater where there was laughing, crying, clapping and cheering? This movie is not to be missed. Take your daughters, mothers, sisters, friends. Take the men in your life as well. They will love it, too! It is life altering.

After watching the movie, we walked across the street for lunch where we ate outside. While we were there a group of ladies came by, obviously on their way to see the film. They were all dressed in the period from the film, the early sixties. They looked like they were all on their way over to Hilly's house for bridge! I wish I would have run over and taken their pictures. It was adorable!!

I ran down to Target and bought the book as they had it on sale for $10! I'm going to snuggle down and read it soon.

Suffice it to say this book (and the movie) is a true phenomenon. Kathryn Stockett has done an exemplary job. The book should be on every school's must read list. It will go down as a modern classic.

So, what are you waiting for? Go. Go now. Read the book. Go see the movie. Let me know what you think!

One word of warning. When you go see the movie, take kleenex!!

I gave my sister a stack of decorator magazines one day. Shortly thereafter she called and asked if I had seen the pot rack in one of them. She had been wanting to hang a pot rack in her kitchen, but until she gets rid of the fluorescent light box "thingy" she really can't hang a regular one. Do you all know what I mean? A large rectangular box with plastic opaque panels hanging smack dab in the middle of the kitchen over the island? So dated. Anyway, she copied the magazine which is a perfect plan "B"! I actually like it better than her plan "A". Sadly, I don't know which magazine it was from to give credit where credit is due. 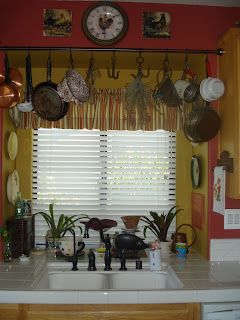 She went out and purchased a bronze shower curtain rod and hung it over her sink. She loves antiques, but also dark colors and more eclectic items than I do. Her home has turned out warm and inviting, with treasures everywhere you look. 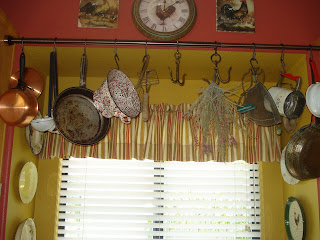 Is this not the most clever thing you have ever seen? She's had lots of fun going out and finding items to hang from it. 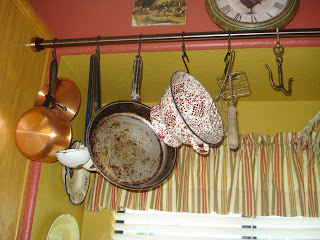 See that old frying pan? That is a frying pan my mom used "out in the country" when we had our farm in the 1950's! Fried pork chops, country gravy, homemade biscuits. Sorry, I digress.....The wood handle is too wobbly to safely use the pan anymore so I gave it to her to christen the pot rack. The potato masher was our grandmother's. Something I also had tucked away. Although I treasured the pan and the masher, it made so much more sense to me to give them to her where they would be utilized rather than hidden. 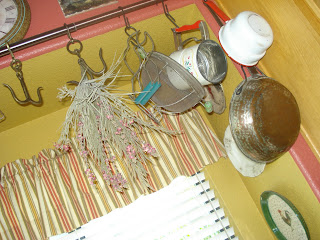 Other items such as the strainer and the sifter have been found here and there. The dried lavender rounds out the affect along with the meat hooks

*My daughter had an issue with a dated fluorescent light fixture in her kitchen and this is what she did. She took the "box" and the light fixture completely down. It left marks on the ceiling and the area was really too low to hang a fixture so she framed in a recessed rectangle, taping, texturing and painting it. She chose pretty hanging lights that she installed. It turned out great and she did it all herself!!! Proud mama here!!!

*A quick note: Maggie was in a photo contest (see side bar). The contest has ended and the newspaper will be announcing the finalists sometime this week. I'll keep you posted!

Every year I always say I'm going to grow more of my flowers from seed. However, when it's time to plant, I just go out and buy flats of flowers. This year was no different, except I did get a package of Teddy Bear Sunflower seeds. I've never grown sunflowers before so I thought I would start out small . I'm hooked! They are super easy to grow and this little variety can be grown in a pot. 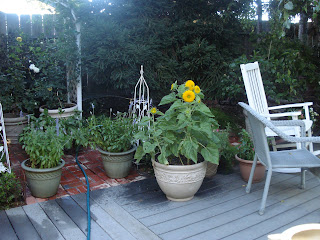 This is as tall as this plant is going to get. It adds just the right little touch of sunshine for the garden. I'm not sure if this variety will give me sunflower seeds to eat, but I really don't care. They are so pretty just as they are. 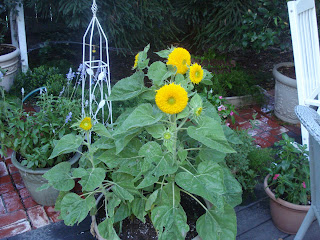 If you click on the picture to enlarge it you will notice some holes in the leaves. I'm not one to do lots of spraying for insects. We do have a spray service but they don't spray the plants, just the ground. 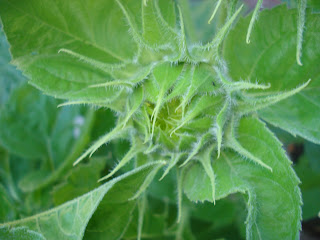 This is how the flowers start out - as tight buds. 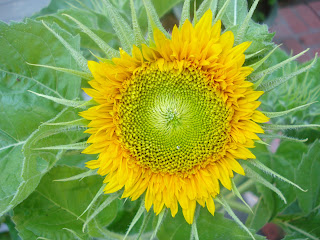 Then they start opening up. They would be pretty just like this but they have more to go.... 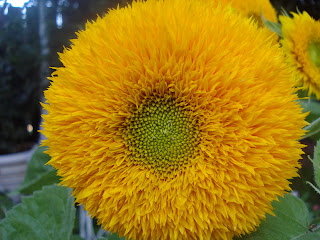 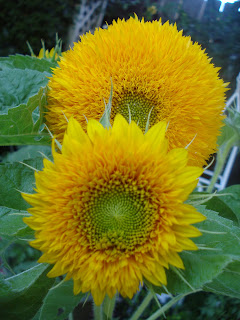 Next year I'll plant these again, along with some regular size ones to put directly into the garden.
Posted by Miss Jean at 7:32 PM 3 comments: 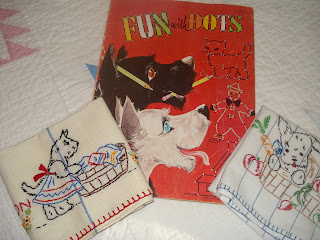 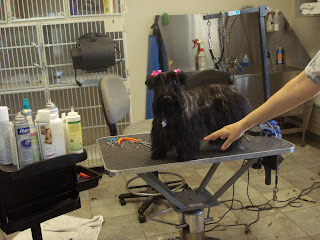 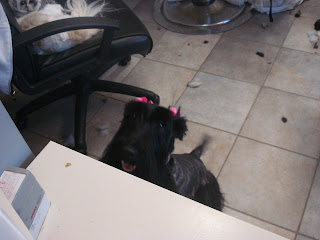 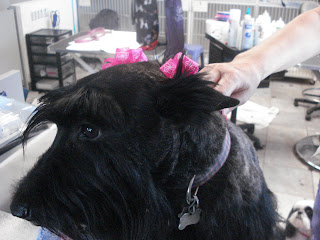 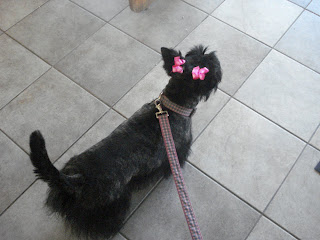 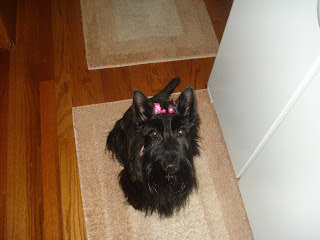 (No Scotties were harmed in the making of this post!)